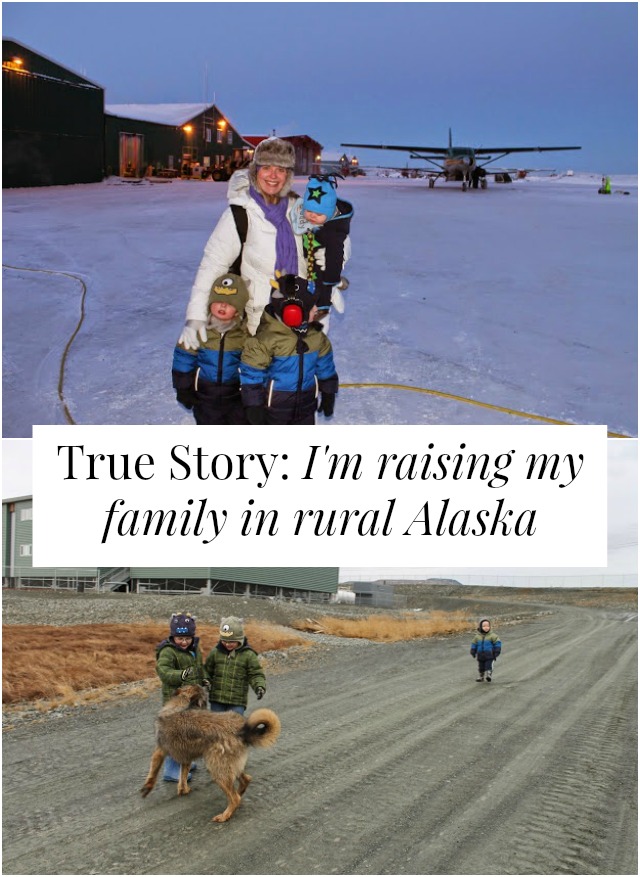 Tell us a bit about yourself!
Hi! I’m Shelly. I am 30 years old and originally from Washington State. My husband Josh and I have been married for nine years and have three sons. The twins, Logan and Jack, are four and our baby boy, Wyatt, is one. I have a bachelors degree in psychology with a minor in human development and enjoy reading and blogging.
Why did you and your family decide to move to rural Alaska?
When my husband was still in the process of getting his teaching degree, I got baby fever. We had been married five years and I was turning 25. He agreed that we could try, as long as I didn’t mind working for two years while he finished up.
I got pregnant the first month.
With twins.
When the babies were five months old I went back to the elementary school where I worked in a special ed class. It was agonizing. I cried many mornings on my way to work during those two years. When Josh graduated I thought I was finally done, but he couldn’t find work anywhere. He applied for job after job, even secured multiple interviews, but his lack of experience left him unemployed.
So I headed back for a third year as a working mom, and two months later found out I was unexpectedly pregnant. I was devastated. How could I bring another baby into this already desperate situation? We were barely paying our bills as it was.
As fall turned to winter, my outlook was bleak. Josh sat me down and asked how serious I was about being a stay-at-home mom. What he was really asking was how far was I willing to go to realize that dream.
Anywhere, I told him. I will go anywhere.
And I meant it.

Tell us about the process of relocating to Alaska.

After attending a job fair in Seattle, Josh secured a position and we began shipping necessities to Marshall, which is a village in southwest Alaska that has a population of 350 people, and is nestled along the Yukon River. There are no roads in or out of Marshall, so everything that comes into the village does so by airplane. We spent over $5,000 shipping our entire household via the United States Post Office.
Do you find the culture in Alaska to be noticeably different from Washington? If so, how is it different?
The culture in Marshall stems from its native Alaskan population, who are Yupik. People here survive on subsistence living; picking berries, hunting moose, and fishing for Salmon in the river. There are also Eskimo dances and potlucks in the village, which bring everyone together. The people here travel by four wheeler or snow machine, and everyone is big into basketball.Obviously, hunting is big here, and Josh had never hunted. This year he shot his first moose, an 800-pound bull, and butchered it himself. It was an amazing amount of work and every time I cook with that meat I am reminded of where we are living.
What are the biggest challenges of living in the bush?
There is snow on the ground from September through May, and in winter temperatures can reach sixty below. For three months of the year, we have only four hours of daylight. Marshall is a small town with just three churches, a gas station and a small co-op. Groceries can be hard to come by, with fresh fruit or dairy being nearly impossible to secure.
I am like everyone else out there. I miss Target. I miss Barnes and Noble. I miss going to jewelry parties and baby showers.
In addition to adjusting to the drastic weather and my non-existent social life, I have been challenged in the kitchen. Back home, I never cooked. Now I bake bread for my family, make tortillas and cook nearly every meal from scratch.

We have found that the slower pace out here is really conducive to raising a family. We like that we are free to make our own choices without outside influence, and have found our marriage to be stronger as a result.
Josh is overjoyed to be providing for our family while doing what he loves, and is anxious to take advantage of being up here and start work on his masters degree in the fall.
The biggest reward for me personally is that I am home with our boys every day.
What do your friends and family think of your decision?
It was very difficult for some of our family and friends to accept that we were leaving. It felt personal to them. But for me, once I reached that point, it became our only option.
Do you think you’ll stay in Alaska long term?
Yes. We plan to be in Alaska long term. That said, we tend to take the whole adventure one school year at a time. With three growing boys, our family needs could change at any time, and we will always take that into account when making plans for the future.
What advice/resources would you share with people who are interested in moving to Alaska?
My advice would be to find someone who already lives in your village or town, if you can, and pump them for information. I also recommend you do your shopping at Walmart because they will ship it to your village for a small fee in their Bush Department. Free shipping is important when you live so far away from civilization and you can get it with Amazon Prime and also with a Target Red Card.
My biggest advice is to go for it! I went for it, and it is the best decision I have ever made.
I will close with my new favorite quote:“Tell me, what is it you plan to do with your one wild and precious life?” -Mary Oliver

Thanks so much for sharing, Shelly!  Do any of you guys live in rural Alaska?  Any tips to share?

P.S. True Story: I worked on Alaskan fishing boats (starting at age 9) + True Story: My husband and I sailed from LA to New Zealand while I was pregnant.