True Story: My Husband And I Sailed From California to New Zealand – While I Was Pregnant

Long distance sailing a dream of yours? This is the story of Antonia and her adventure sailing from San Francisco to New Zealand with her husband. This is one of many True Story interviews in which we talk to people who have experienced interesting/challenging/amazing things. 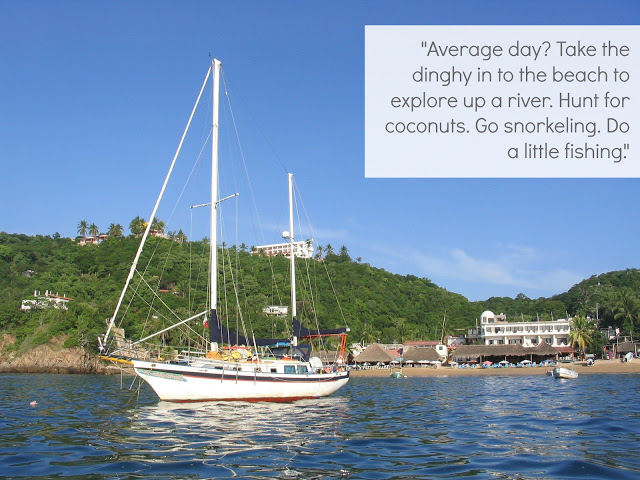 An Interview with Long-Distance Sailors

Tell us a bit about yourself and your long-distance sailing adventures!

I’m from San Francisco, but I’ve lived in lots of places—New York, France, Rome, Guatemala. These days, I’m living in a small town in the north of New Zealand called Whangarei. My husband Peter and I washed up here five years ago in our sailboat Sereia, after cruising for two years through Central America and the Pacific. Now we have two kids, Silas and Miranda. Next year we’ll be moving to the country, so we’ll probably be adding to the family with some chickens and sheep.

How long have you been sailing?

I started sailing with my brothers on the San Francisco Bay when I was a little kid. But after college, I saved my money and hitched a ride on a yacht in the Caribbean as a cook. That’s what got me hooked for good – there was one morning, just at dawn, when I hung backwards over the lifelines and saw the moon in a pale pink sky, skimming over a water-washed planet, and that was it: I felt alive.That was 13 years ago. But in that time, I’ve lived on a boat full-time for 5 years. 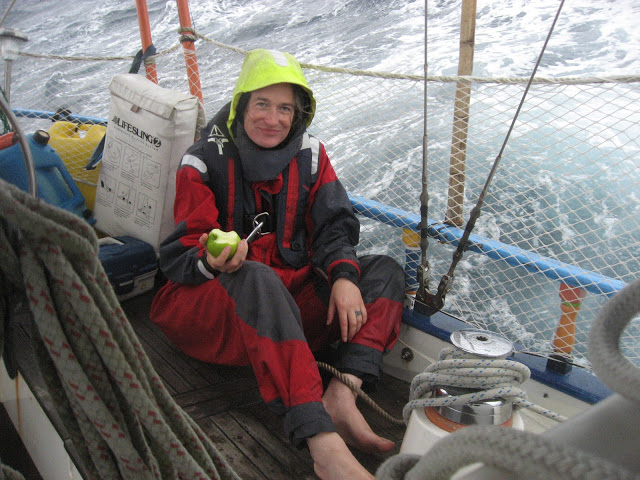 What inspired your decision to long distance sail from San Francisco to New Zealand?

Peter and I were feeling really angry about the Bush administration. I was sick of paying taxes to fund foreign wars I didn’t believe in, especially when I couldn’t afford medical insurance. In 2004, I was teaching theater classes in San Francisco, and I thought: how am I ever going to afford a house in the Bay Area? How will I ever afford to send my kids to a decent school? What if I get in an accident and I bankrupt my family?

I majored in history and political science in college. I knew that other industrialized nations didn’t share America’s views about “every man for himself.” If it had been up to me, I probably would have moved to France. But Peter didn’t speak French, and New Zealand was downwind from San Francisco.

How did you prepare for your trip sailing across the Pacific?

Luckily, Peter was already an experienced captain. I like to tell him that’s why I married him, but that’s not true—he’s pretty sexy, too.

Like most Americans, we went on a buying spree, thinking that we needed all the right foods and all the right safety equipment, but we didn’t really need any of it. Once we got out there, it became clear that all we needed was a well-founded boat, and each other.

However, our parents didn’t agree. My Dad insisted on buying us a life raft, and Peter’s mom made us carry an EPIRB (Emergency Position-Indicating Radio Beacon). 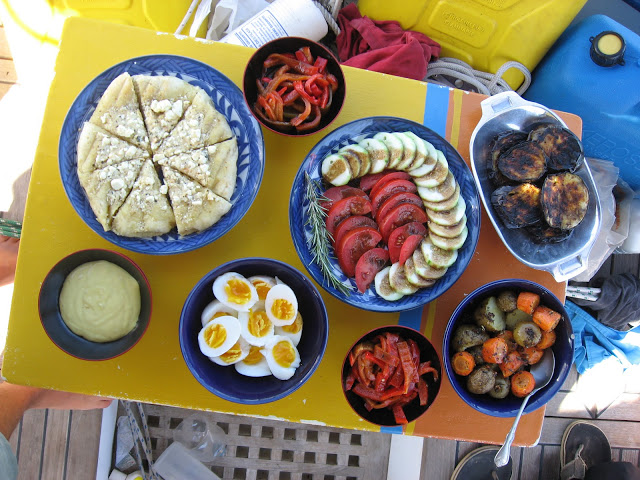 Tell us about an average day on the boat during your trip across the Pacific.

The best days were coastal cruising along the coasts of Mexico and Central America, then again in the islands of French Polynesia. Wake up in a secluded bay, to the sound of tropical parrots twittering in the trees. Sip your coffee on deck, the boat gently rocking at anchor. Get up, stretch, maybe take a morning dip in sparkling blue water. Take the dinghy in to the beach to explore up a river, or hunt for coconuts. Sometimes go snorkeling, or do a little fishing.

I cooked a lot from scratch, since we didn’t have refrigeration on board. I made breads and pizzas, dips and hummus from dried beans, and we’d grill fish we caught ourselves. In Central America, there was always some little market with incredible fresh produce, or sometimes locals would visit to sell us fresh fish and lobster.

Of course, those were the best days. There were also the days when we had to take three buses to some dusty, blistering hot town to hunt for stainless steel hardware in Spanish! Or cope with crooked customs officials, or take the toilet apart. But for the most part, it was two years of paradise. 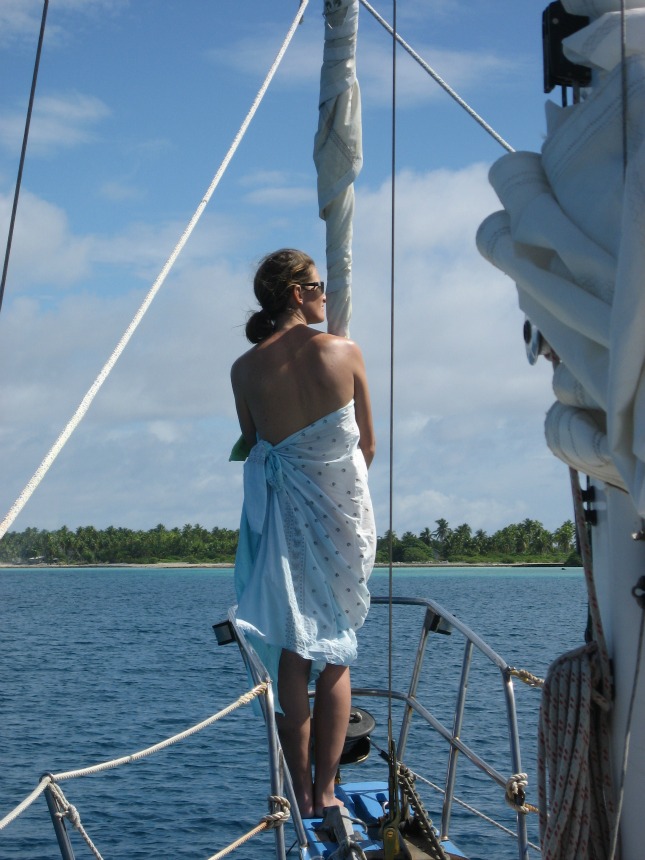 What were the biggest challenges of long distance sailing?

The single biggest challenge was being pregnant for our crossing of the Pacific. The plan had been to have this romantic ocean crossing, and try for a baby along the way. But then Peter knocked me up in an Ecuadorian boatyard. This meant two things: we crossed the ocean at the height of my morning sickness, and I couldn’t take my seasickness medication since it wasn’t safe to take while pregnant.

For 27 days, I was sick as a dog. I could barely lift my head to choke down a little brown rice twice a day. I drank water, I listened to books on tape, and I threw up. Occasionally, I crawled up on deck to look at the endless sea. Peter steered our boat across the Pacific Ocean by himself. That man is incredible.

What was the most exciting/scary/surprising thing that happened during your long distance sail?

I can think of a few moments, but the one that stands out is when we left the boat at anchor in Acapulco and went on a road trip up into the mountains. A tropical storm rolled in while we were gone, and our boat dragged anchor, crashing into a small fiberglass fishing boat. Thankfully, no one was hurt—our boat weighs 21,000 lbs empty, and it could have caused some terrible injuries.

But once we realized there wasn’t any human damage, then we found out the Port Captain wanted to see us. I was terrified! I had this idea in my head they’d put Peter in some Mexican prison, and I’d have to find an English-speaking lawyer in Acapulco, and that would be the end of our adventures.

But that was just my own silliness. The Port Captain was a model of professionalism. There was no talk of lawsuits or prison. He just asked us to pay for the repairs on the other guy’s boat, which came to about $600, and he asked us to please be more careful in the future.

What did you learn about yourself (and your husband) while doing a long distance sail?

We learned that we are a fantastic team. More times than I can count, we have held one another’s lives in our hands. We trust each other with everything. Sure, there were days when we got on each other’s nerves, but then we learned to give one another space and remain civil, even when we were secretly spitting tacks.

That strength and resilience in our marriage has served us well as we confronted the stresses of immigrating to another country, and having two children, one of them with major learning disabilities. I don’t know what would have happened if we hadn’t had the strength and beauty from those two years to draw on.

What advice would you give to others interested in long-distance sailing adventures?

Just Go. Go now. Go with the boat you can afford. Don’t wait for the perfect boat, the perfect gear, because then you’ll never go. Go now.

Thanks so much for sharing, Antonia!  Are any of you sailors?  Would you ever live on a boat?