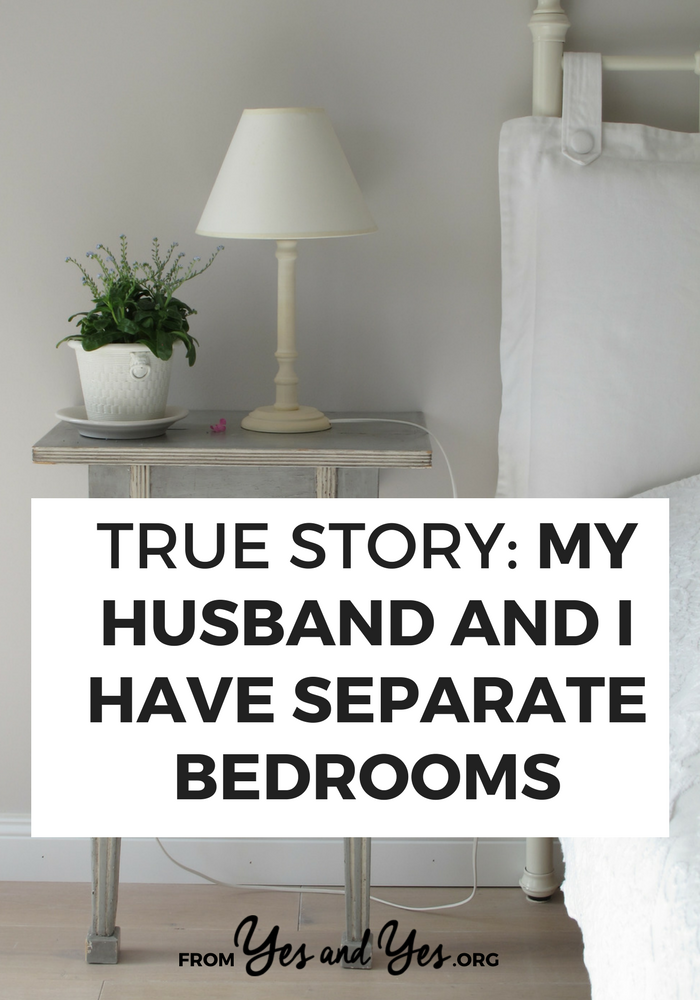 When we get move in with a partner, sharing a bed and a bedroom seems like a forgone conclusion.

Even if our partner is messy, snores, or goes to bed at a different time, we soldier on.

Jamie and her husband tried something different.

My name is Jamie. I’m 33, and I currently live in North Carolina. I’m a network engineer at a MSP, and when I’m not building racks of routers and switches, I enjoy biking, hiking, and reading. I like to scribble, with the intention of never showing anyone my novels, and I love to paint too. My husband, Tom, is also my best friend.

What’s your husband like?
So, Tom and I met on Livejournal. (Yeah, this was back when LJ was the big thing.) We met around 2005, and began chatting about a shared hobby: reenacting. We started dating in 2006. We got married 5 years later.
Tom is hilariously anal-retentive about some stuff and a total slob about others. He’s the kind of guy who will organize our pantry by food type, but leaves his half-finished sewing projects on the floor of the den, then realizes he can’t find a particular piece three days later. I love him to pieces, but he’s the first person to tell you he’s awful at organizing his own stuff.
He’s a costumer and a tailor, so our only spare room is crammed floor to ceiling with bolts of fabric, costumes on racks, sewing machines, and tons of books. We have a private library of about four thousand books, which he’s getting ready to organize by the Dewy Decimal system.
What lead to you and your husband having separate bedrooms?
Technically, we have my bedroom and the most comfy futon alive. Tom has some back issues as well as severe snoring problems, not to mention extreme insomnia (both due to his time doing two tours of Iraq), so he prefers to sleep on his side with something up against his back.
It sounds weird, but the futon we have is not your average metal frame and flat mattress. We found it by accident on Craigslist, and the owner only wanted seventy five bucks for it!
It’s custom made from rosewood, with pop out magazine holders and carved legs. We looked it up, and its estimated worth is about 1500 dollars. It was a TOTAL steal.
At what point did you guys say “Okay, maybe we should just have separate bedrooms”?
We both suffered for YEARS before we admitted we needed separate bedrooms. He snores and I have what’s looking to be probably sleep apnea. I need to get tested, but I’ve woken several times in the night before because I stopped breathing.
The lack of sleep led to some awful fighting, and there was also some social pressure. We didn’t want to be one of those couples who eventually stop being affectionate or sexual because we’re not sleeping together. It’s a completely unrealistic fear, but I’d argue its’ definitively real.
When we moved to our current city, he slept on the couch and I slept in our bedroom. When we bought the futon, he was so thrilled because of how comfy it was, but we keep it in the living room, because the other bedroom is crammed full of all his costuming gear!
What are each of your bedrooms like?
Our living room (aka his bedroom) is a hallmark of Victorian furniture, books everywhere, and gorgeous Edwardian fashion plates on the walls. We also have pictures of beautiful temple ruins from Italy in there, as well as vintage WWI photos.
It’s an eclectic hodgepodge of eras and styles, and it’s also where Tom does a lot of his hand sewing. We watch movies together in there and I work on my laptop, but when it’s bedtime, I get out so he can unwind. He has severe insomnia, so it can take him a while.
My bedroom has a 1940s bedframe and a lot of dark, woodsy furniture. There’s also a 7-foot amoire in there for reenacting gear. I keep some personal paintings on the wall, as well as the painting I commissioned for my birthday. There’s a wooden trunk for blankets and a spot for me to lift weights and do yoga.
How do you guys navigate sex since you don’t share a bed?
Honestly, sex turned out to not be a problem. We just use my bedroom. If anything, having separate rooms makes me more, um, affectionate, and I am totally guilty of sneaking downstairs and snuggling him in his sleep. He growls at me, but he’s pretty good about accepting secret midnight rendezvous!
Do the people in your life know you have separate bedrooms?
So, joking, I asked my husband that question. He said straight up: “Any of my guy friends who would have asked me that question also have either slept next to me at a reenacting event, or were with me in Iraq. I’m a REALLY bad snorer. If you have to sleep next to me, you want to be the one who falls asleep first.”
Since we’ve been together for almost 12 years, I have to agree. He’s loud enough to wake the dead.
To be fair, most of my friends have unconventional relationships themselves, and not sharing a bedroom is the least of it. They’re very laissez-faire about the whole thing.
If the snoring/sleep apnea issues were resolved, do you think you’d go back to sharing a bedroom?
Honestly? No. I like having the freedom of my own room. When we buy a house, he’s already talking about having his own study and space, and  I think it’s so nice to have the freedom and privacy of your own room.
What have you learned from this that ANY of us could apply to our lives?
I think the social fear that had me in our earlier years is very real, but it can be overcome when you realize how little other people are going to care. It’s not their marriage, it’s yours. Ours is fairly unconventional anyway, so when I stopped being worried about other people, I started thinking of what would make us happiest.
It's your marriage, and the way you make it work might not mesh with other people's ideas of what a good marriage looks like. Click To TweetBut if it works for you, that’s all that matters!
Thanks so much for sharing your story, Jamie! Do any of you have non-traditional sleeping arrangements with your partner?
P.S. True Story: I’m in an open marriage

Photo by Cheryl Winn-Boujnida on Unsplash