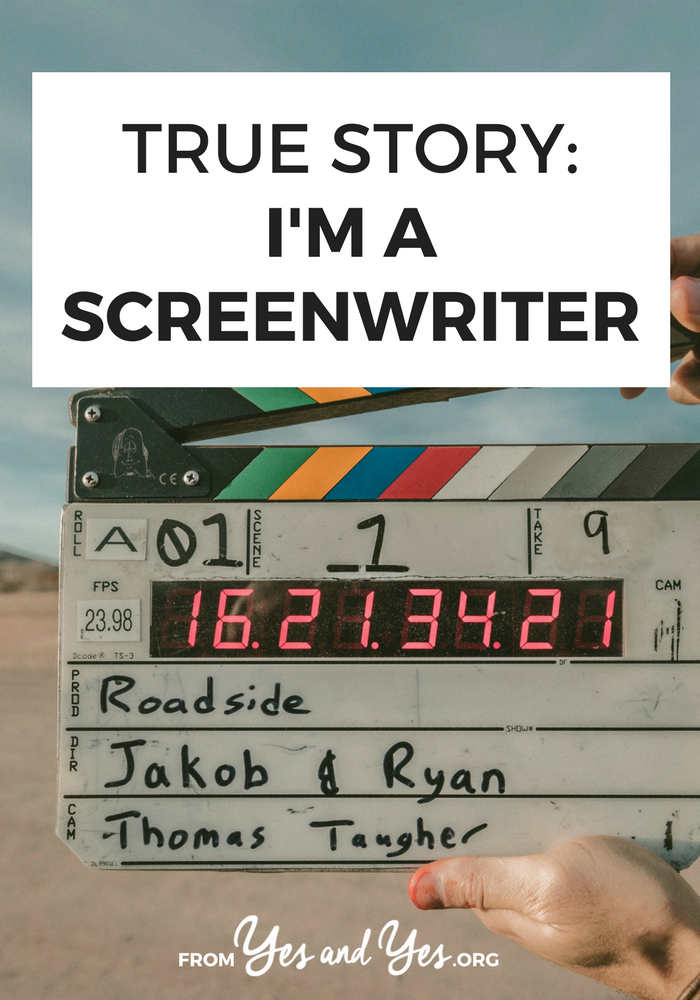 What does it take to become a screenwriter? If you can write blog posts and marketing emails, can you write a script that actually get turned into a movie?

I’m 38, originally from New Jersey (Jersey girl!) and then moved to Napa, CA for a few years before landing in Los Angeles. I’m a Professional Screenwriter and a Marketing Strategist that helps entrepreneurs use Hollywood and professional screenwriting techniques to make their businesses obsession worthy! 🙂

For those of us who don’t know, what does a screenwriter, like, DO?

A screenwriter writes the script that you eventually watch on TV or in the movie theater. We come up with the idea, the world/setting, the story, the characters, the dialogue – we do it all!
That doesn’t mean there aren’t other voices contributing to the project (producers, directors, actors, studio/network executives all have creative input) but we do the actual writing and deliver the end result that the everyone uses on-set to film the actual show/movie!

You’ve been writing for ages, but you only started screenwriting relatively recently. How’d you get interested in screenwriting?

A few years ago, I used to write erotic fiction stories for my friend’s eyes only. I had this one story that was a paranormal romance take on the Kennedy’s (lol) and my friends were obsessed with it. I always thought I’d self publish it as a novel, just for fun.
One day I was visiting Los Angeles for a speaking gig (for my marketing business) and I stumbled into a bookstore. There was a book there called the Coffee Break Screenwriter and it promised that you could write a script in just 10 minutes per day.
I always imagined my romance novel as a cable series, so I thought: why not? I wrote the pilot episode in about 6 weeks and then contacted the author of the book to see if I could pay her to read my script and see if it was any good. Turns out,  she’s a script consultant and that’s what they do (who knew?!)
During our first conversation, she asked me how long I’d been a screenwriter. I laughed and told her that this was my first script and I only wrote it because of her book.
She was floored and told me that my writing was on par with working screenwriters. Of course my script still needed a TON of work, but she gave me enough confidence to keep going. I rewrote that script 7 times with her guidance and support and that’s how I learned to write. Then I just kept going.

How does screenwriting differ from the other types of writing you do?

I’d say storytelling techniques are quite similar in both fiction and business writing. One difference is that with fiction/scripted narrative I get to create entire worlds and characters. There is a ton of research that goes into writing screenplays.
I’d say I spend just as much, if not more, time researching than I do writing. You want the world and characters and story to feel authentic, so that means digging into some interesting spaces. I constantly feel like an undercover journalist, and my Google search results are terrifying (just ask my husband!)

The trailer for Melissa’s first movie!

How long does it take you from go from having an idea to pitching execs?
It really depends. Right now my process is that I work with my literary manager to develop an idea, which can sometimes take months.
Then I create an outline and we usually do several revisions of that before I get into draft. I’d say I probably write about 3-4 drafts (first draft + revisions) before he’s ready to do a “circle of trust” read. That means passing the script to a few of his other clients and seeing how the story lands.
They give notes about what does/doesn’t work for them, then I do another revision and then my manager begins pitching it. I’d say that whole process takes about 10-12 months.
What makes for a successful script idea?
A world we haven’t seen before with a dynamic character and an exciting hook. A great example is Breaking Bad.
A high school chemistry teacher diagnosed with inoperable lung cancer turns to manufacturing and selling methamphetamine in order to secure his family’s future.
World: cooking meth
Character: chemistry teacher with cancer
Hook: He decides to sell meth to secure family’s future

How do you avoid tropes and trite story lines? I feel like I’d inadvertently write something that’s been done a million times because I’ve absorbed the story or character by osmosis!

Research really helps with this. You can find fascinating story ideas just by digging in the newspaper and looking at online message boards like Reddit. Writing from truth helps to avoid tropes.
You can also think of ways to turn a stereotype on its head. Finding a way to spin a common stereotype often makes for an exciting story.
And, sometimes, tropes are okay. If you watch any procedural crime dramas on TV you’ll notice they use tropes all the time. That’s because the audience loves that formula, and it keeps them at the top of the ratings chart every single week. Sometimes tropes aren’t bad.
What tools, resources, books, websites have helped you with this?
The best screenwriting book is the Coffee Break Screenwriter by Pilar Alessandra. She also offers script consultations and teaches classes.
Another great place for classes if you’re an aspiring TV Writer is Script Anatomy. Top notch instructors.
Read TONS of scripts. This is how you understand structure and story. There are tons of free TV scripts HERE.
Watch TV and movies. Soaking in the narrative helps you become a better writer. Plus, it’s the first thing you’re asked in pitch meetings: what are you watching?
Speaking of pitch meetings, taking improv classes or acting classes really helps with delivering a great pitch and thinking on your feet.

What has surprised you about screenwriting?

How collaborative it is and how many voices are involved in a project. There are numerous executives and also the director and (sometimes) lead actors who voice opinions and give feedback. Sometimes that feedback is very critical.
It’s not enough to just be a great writer. You have to be open to collaboration and critique, not take anything personally, and find a way to make everyone happy while maintaining the integrity of the story.

What advice would you give to other writers who are interested in taking the leap into screenwriting?

Focus on your craft! Read any script you can get your hand on. Watch tons of TV and movies. Write what excites you, not what you “think” might sell. A mentor once told me that “good work always gets found” – so focus more on honing your craft than anything else!

Thanks so much for sharing your story, Melissa! Do you guys have any questions for her?