True Story: I Write For A Hit TV Show 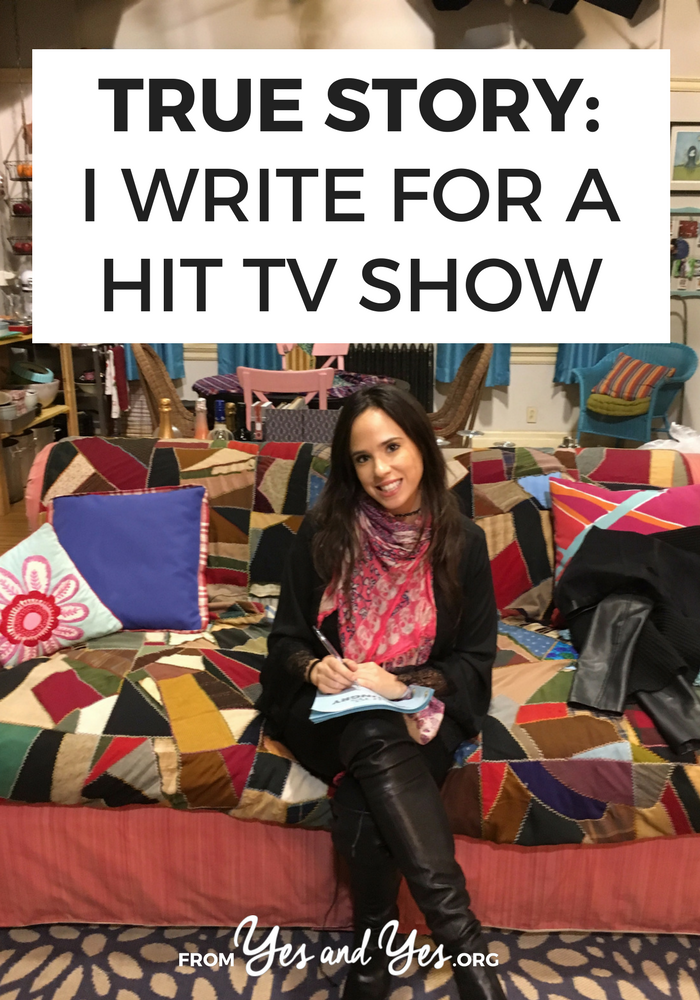 When did you first get interested in writing for tv?

Like a lot of young girls, Sex and the City kinda changed my life. I was obsessed with Carrie Bradshaw and loved her sense of humor and the camaraderie among her friends (I mean, they were always having brunch, who doesn’t love brunch?)

To me that show was one big, six season romantic comedy. It made me realize that working in television (as opposed to movies) allowed a writer to really explore characters, themes, and worlds without having a two-hour limit. That show made me realize that writing for fun, smart, female characters (like Gabi Diamond on Young & Hungry) was my passion!

You got hired for your first tv writing job at 21 – that’s crazy! Can you walk us through the work and projects that lead up to that first job?

My first TV job was as a writer’s assistant on Young & Hungry but my first job in entertainment was being the personal assistant to an Oscar-winning actor in New York City.

Being a personal assistant is incredibly grueling work. You have to be available twenty-four hours a day/seven days a week and handle any problems or requests that come up (hiring private planes, getting last minute Broadway tickets, etc). Sometimes I even had to answer fan mail.

That job not only made me super humble (when you’re taking out someone’s trash it’s hard to have an ego).  I was able to read scripts and meet tons of interesting people in entertainment—many of whom I still keep up with today.

However, after being a personal assistant for two and a half years I was ready to do something else. I worked my contacts and wound up moving to LA to work on the first season of Young & Hungry as a writer’s assistant.

What is a writer’s assistant? It’s one of the hardest jobs in the world. You have to take notes all day, proofread every script (sometimes at 3am when you can barely stay awake), and have every draft organized and at the ready in case your boss wants to look at jokes from a previous drafts. The job is intense!

But after two seasons of being a writer’s assistant, my boss promoted me to Staff Writer at the end of season two. Needless to say, it was a dream come true!

Walk us through an ‘average day’ at work.

8:00am I wake up. Sometimes I drag myself to the gym but most days I wake up, make myself an entire pot of coffee and read the Young & Hungry draft from the day before.

10:00am I arrive at CBS Studios where the Young & Hungry writer’s room and soundstage is based. Over the weekend I try to think of some episode ideas to pitch since most Mondays my boss, David Holden (who created the show) likes to hear episode pitches.

11:00am All of the writers sit around a conference table in the writer’s room and pitch David ideas. The best ideas usually come from real life. For example, one of my best friends from home asked another friend to be a bridesmaid in her wedding (and not me) and that ended up being the episode I wrote for the show this year.

1:00pm David decides on an idea and we start putting it on the board. What does that mean? We divide our show into Act One, Act Two, Act Three with typically three to four scenes in each act. All of the writers start potentially pitching on ideas for each scene as the writer’s assistant takes notes of joke pitches.

2:00pm It’s network run through time! Every week on Young & Hungry we are working on two episodes. One is the episode that we’re shooting that week and one is an idea for an episode we’re shooting the following week. So, this week we’re watching a run-through of an episode called “Young & Darts.” It’s very funny!

3:00pm The network loved the run through! That means it won’t be such a late night rewrite.

6:00pm We finish rewriting the episode but it’s time to pitch on alternative jokes. At Young & Hungry we have a joke room and alternative jokes are just what they sound like… backup jokes in case the jokes we have don’t work.

9:00pm Me (and the five guys I share an office with) finish pitching on alt jokes. I head home looking super tired and collapse into bed.

How many hours of work and how many revisions goes into one episode of Young & Hungry?

Hours and hours of work go into each episode of Young & Hungry. We usually write several drafts of each episode. I’m talking five or six, and every single day until we shoot the episode we’re perfecting it. We sharpen the jokes, take out unnecessary scenes, etc.

Sometimes if the episode is not working at all we have to rewrite the whole thing! If an episode needs a lot of work I could potentially be at the office until midnight or even later.

How is writing for television different than other types of writing?

Could you give us an example of a scene or joke you wrote that you’re really proud of?

The person whose reservation Josh stole was proposing to his girlfriend and when Josh and his date, Gabi sit down to dinner the waiter puts a ring in Gabi’s champagne glass and she freaks out thinking he wants to propose. Hilarity ensues. I was really happy when that idea made it into the episode.

Where do you see yourself in five years?

In five years I would love to be running my own show, writing another book (shameless plug I just co-wrote a lifestyle guide called “Young & Hungry: Your Complete Guide to a Delicious Life” out now), and maybe starting a digital site with content geared towards young girls trying to figure it all out!

What tools/resources/websites/books/apps have helped you with this?

I love listening to podcasts by successful people. Every morning I listen to an interview with someone I respect. Whether it’s Mindy Kaling (TV Writer), Jennifer Weiner (book writer) or the Nasty Gal podcast with Sophia Amoroso, listening to interviews with successful woman gives me the motivation to go out, kick butt, and make things happen in my life!

Thanks so much for sharing your story, Diana! Do you guys have any questions for her?