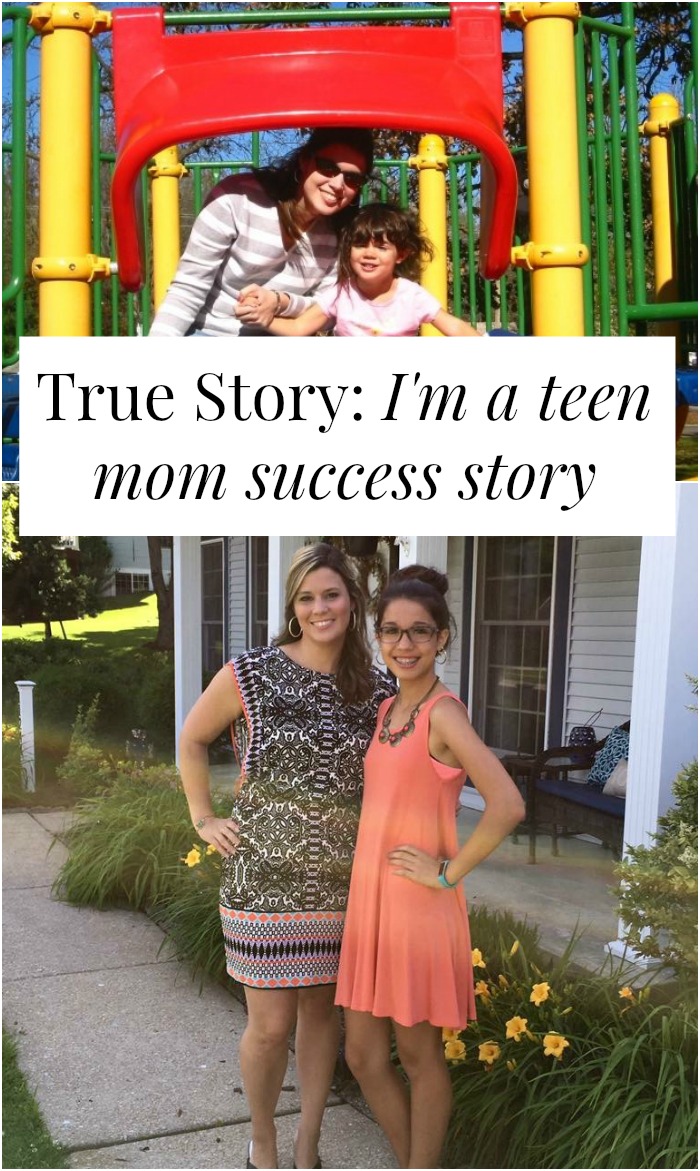 What do you think of when you hear the words ‘teen mom’? That MTV series? That girl in your 11th grade history class? 17 year old girls don’t usually make an active decision to become mothers while still in high school. If they do become pregnant, most of them choose to end the pregnancy or give the baby up for adoption.

We see very few stories of teen moms who kept their babies and built a happy life for themselves. But that’s what Emily did. This is her story.

Growing up, what did you imagine motherhood would look like for you?

I always wanted to get married and have a family young. I did a lot of babysitting growing up and always dreamed of the day I would have my own family.

What did your life look like when you got pregnant?

I was 17 years old and just starting my senior year of high school when I got pregnant. My boyfriend and I had been together for about a year. In school I played flute in the band, and was captain of our school dance team. Outside of school I was involved in taking dance classes several days a week and even taught my own classes at my studio.

How did you feel when you realized you were pregnant? How did your boyfriend react?

I was scared when I found out I was pregnant, but also felt a strange calmness about it. I think I was more nervous and scared about telling my parents than actually having the baby! I was of course very nervous about how I would be able to care for the baby and how my life would change from what I had planned it to be.

My boyfriend was pretty scared. We had big plans of going to college together and getting married but this was going to change everything.

Did you ever consider not keeping and raising your daughter?

I never considered not keeping her. I was adopted myself and had always told myself that if I were to ever get pregnant I would not give up my baby. So I knew from the start that I would raise her.

What was life like during those first few years of motherhood?

Life was full of ups and downs those first few years! My boyfriend and I ended up getting married a week before our daughter turned one year old. We were both going to college full time, working, and trying to raise this little girl, all while growing up ourselves. We ended up getting divorced after being married a little over a year.

Trying to be a single mom and make ends meet was the hardest thing I’ve ever gone through.  I didn’t want to ask for help but things were really tight and hard during that time. My daughter was definitely the light in all of it though. She was so much fun and made it all worth it.

Was there a turning point when things got ‘easier’?

I can’t really pinpoint when things turned around. I ended up getting remarried when my daughter was 3 and had another baby right away. Financially things were still hard being so young with 2 young children.  Certain things were easier and certain things remained hard. Just in a different way I guess.

Pretty much my entire adult life I’ve had a baby or toddler until a couple years ago, so maybe a couple years ago things got easier?! Now that they can all go to the bathroom and get dressed by themselves 😉 Being married helped with emotional support though. That was big, for sure. Just to know I had someone on my side.

I felt like I had been abandoned by all my friends when I got pregnant and they all went off to live normal college lives and I was left behind with a child. So it felt good to have someone to just be with.

These days you have a pretty great life. What does your family look like now?

These days life is full!  Emotionally and physically!  My days are full of running 4 kids to multiple activities and tackling mountains of laundry! My husband is a firefighter and works 48 hour shifts so sometimes it is hard to juggle getting everyone where they need to be.

But it’s an exciting time now that they are all old enough to do some things for themselves, have real conversations, and get to take them to do fun activities together that weren’t possible when we had babies around. It makes me sad that they are so big but it is also a really fun time!

Do you think there were any ‘benefits’ to having your daughter young?

I think the biggest benefit to having my daughter so young is that I feel like I can still really relate to her. It wasn’t that long ago that I was her age and so I don’t feel so out of touch with the stages that she is in. We have a very close relationship.

Obviously, not every story of teen parenthood turns out as well as yours has. Why do you think things have turned out so well for you guys?

I am a woman of faith so I would have to say by the grace of God I have had things turn out well for me. I think I also just never second guessed myself. This is what I was handed and I was going to make it the best situation that I could.

That’s not to say that there haven’t been hard days and lots of mistakes made, but parenting is all I have ever known my entire adult life. So to me, this is just what you do. I don’t know any different.

I think my biggest piece of advice would be to just take what you have and make the best of it. You don’t have to be a stereotype.  Just because your life takes a different road than you plan, it doesn’t mean that all your dreams are derailed.

Don’t get lost in negative but choose to find the positive. My quote in my high school senior year book was “it is what you make it.” And that’s the motto I choose to live by.

Thanks so much for sharing your story, Emily! Do you guys have any questions for her?