True Story: We lived off the grid 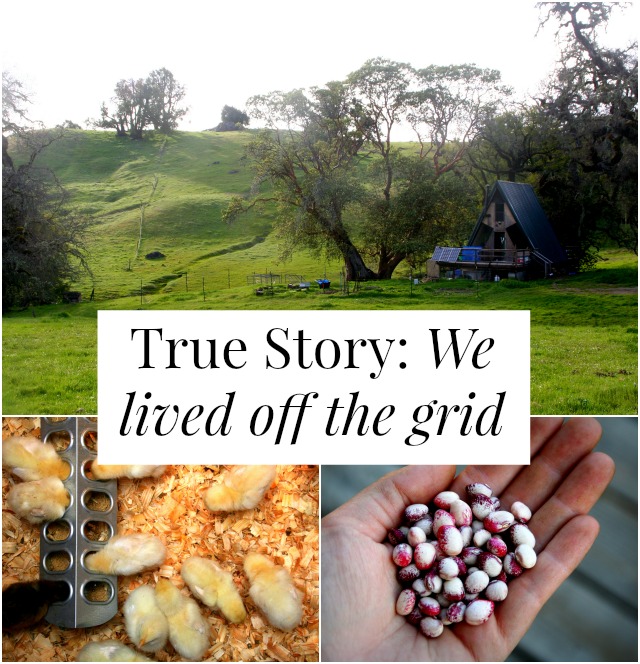 I think a lot of us fantasize about ‘getting away from it all’ and getting off the grid. No utility bills! No neighbors! Meals from the garden! Today, Chandelle is telling us what it’s really like – loud gas generators, coyotes, and all. FASCINATING.

Tell us a bit about yourself!
Hi, I’m Chandelle! I’m 29, and I live in a small town of 1800 people in Mendocino County, California, with my husband Jeremy and our children Isaiah (age 8) and Willow (age 7). I work full-time in administration at a Waldorf school. In my off-hours, I like to read, write, cook, take pictures, and fantasize of a homesteading life. For two years, I lived off-grid with my family in a 300-square-foot, one-room cabin on a 5000-acre ranch.

For those of us who don’t know, what does it mean to live ‘off the grid’?
For most people I think the central issue is self-sufficiency. In some ways, you are producing your own energy, water, and maybe food. But the definition can be as flexible or rigid as you want it to be. In the loosest of terms, you can be living off-grid even if everything in your house runs on gasoline from a generator, because you’re not “on the grid” and paying a regular bill to PG&E.

On the other hand, a purist might not consider my family’s situation to be “off-grid” because we still used a propane stove. But some measure of self-sufficiency, especially in energy production, is standard.

What are some of the misconceptions about people who do this?
The primary one might be that people who do this must be “survivalists,” stockpiling weapons as well as canned food, full of paranoia and perhaps a religious fervor. My family isn’t religious and we had just one gun while we lived off-grid, mostly for scaring off the bobcat who liked to eat our chickens.

Living in a rural and forward-thinking place, I know many people who live fully or partially off the grid. The off-grid folks I know all have jobs and kids and tend to be motivated more by progressive values, like being less dependent on an extractive, exploitative economy, than fear of the government.

How did you and your family make the decision to do this?
Our primary motivation was a desire to grow our own food and be more self-sufficient. We could grow a small garden in town, but we wanted to grow a majority of our food and raise animals as well.

For a while, we lived and worked on a friend’s farm, which gave us a taste for the potential of that lifestyle, but cohousing was just overwhelming for two highly introverted people. We found this little ramshackle cabin and fell in love immediately. I was inspired by the possibility of living within strict lifestyle limits, and our landlord was very flexible about our gardening and livestock plans. 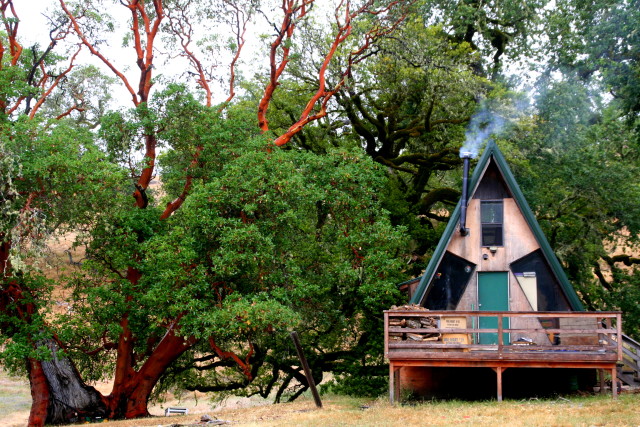 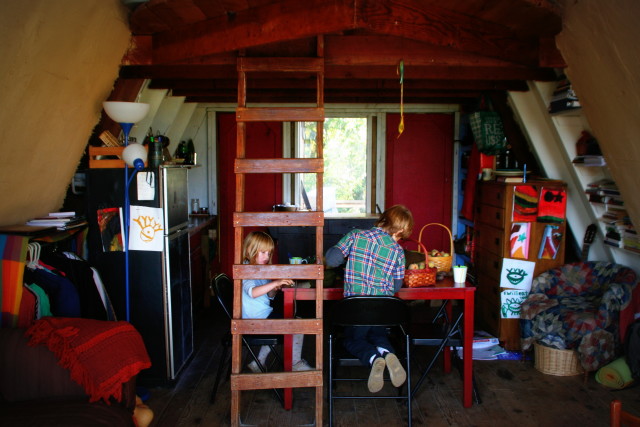 How did the people in your life react to your decision?
In this community, because it’s low in population and dominated by the cannabis industry, it’s a very accepted and typical thing to live far out in limited circumstances. Some people were even really happy for us and hoped that we’d have a good experience. We had lots of community support.

Our parents were a little concerned, though not surprised because we’re often engaged in these little experiments in living. There were some fears about rattlesnakes and being so far from a hospital (about 45 minutes), and occasionally some snarky comments about human progress and Little House on the Prairie.

Can you tell us about the process of moving from a ‘traditional’ American life to an off-grid life?
We’d been progressively downsizing for many years and hoping to someday live in a tiny house, so it wasn’t much trouble to shrink down even further. We donated most of our furniture (just thrift store stuff) and most kitchen appliances and sold our television. I loaned my precious, ridiculously expensive Blendtec to a foodie friend because I knew we’d never have enough energy to run something so powerful.

We didn’t want to limit our children too much, so we organized the loft area so they could have their own space and things. We kept our jobs since we were just living a little further away, and our kids stayed in the same Waldorf school they’d been attending. (I wouldn’t homeschool anyway, but especially not in such an isolated environment.)

How did you deal with electricity/plumbing/internet/phone?
There was basic plumbing that ran out to a leach field, so our bathroom was a normal set-up. We also used a homemade composting toilet. (Believe it or not, they actually stink less than regular toilets.)

Our water came from a spring on the ranch. The water was limited in the summer, so we learned to be conscious about our use.

We had no internet or cell phone reception, so if anybody wanted to visit we’d need advance notice because the gates were always locked to keep out poachers.

When we first moved in, there were solar panels on the front porch, but they turned out to be too damaged to work. So for quite a while we were dependent on a gasoline-fueled generator for lights at night. The noise and smell (and cost) were so bad, we’d usually use candles instead. Finally, we were able to have our own solar panels installed, and from those we could have lights on, charge our laptop, and even run a (regular!) blender.

What were the biggest challenges of your time off-grid?  The biggest benefits?
The biggest challenge by far was the other animals on the ranch. Rattlesnakes, bobcats, mountain lions, coyotes, skunks, foxes, raccoons and all manner of insects and ground-burrowing animals competed with us for the food and animals we raised, and in most cases they won.

We shared land with a cattle rancher, and there were all sorts of unexpected consequences from sharing land with cattle. Trying to raise a garden alongside cattle, even with the best solar-electric fencing we could afford, was an exercise in futility. The soil was so compacted, we had to use a pickaxe to break through it. And in such a hilly environment, the erosion was pretty bad. The roads were nearly impassable during the winter and spring rains.

Despite all the trouble, though, I’d count those two years as some of the happiest in my life. My family grew closer and we all grew stronger, mentally and physically. Much of my value system was clarified while living off-grid, which enabled me to move forward with much better understanding of what I wanted to do with my life and what I hoped to teach my children.

You’re no longer living off-grid.  What led you back to ‘traditional’ life?
Apart from sheer exhaustion and reeeeally needing a bedroom door with a lock, we very much wanted to be a part of community life. While on the ranch my ideas about “self-sufficiency” took a turn. Instead of being fixated on absolute independence — which is virtually impossible — now I look for opportunities for interdependence — mutual community support.

This was difficult when we lived so far out that we rarely saw another human being. We were forced to be mostly self-sufficient, which is not only isolating but terrifically inefficient. We learned so much and became very capable and resilient on the ranch, but I wouldn’t say that situation was ideal for someone visualizing a more cooperative and sustainable world for everyone.

When we moved here we really hoped to maintain some of the lifestyle we’d developed on the ranch. We chose a small house on two acres, and intended to hook up our solar panels and run our house at least partially on that energy. But the house is completely surrounded by redwood and oak trees, which are lovely but block almost all direct sunlight. So we’re back on the grid for energy and utilizing a community water source. Sometimes I feel awful about this. It’s been a big compromise. But my aspirations haven’t really changed — I’m just willing to be a bit more patient in achieving them.

What did you learn from this experience that any of us could apply to our daily lives?
For me, this experience was all about living out my values and defining my limits within those values. In the process I learned a lot about balancing the inevitable gap between idealism and reality.

Before I went off-grid I was intensely influenced by Derrick Jensen’s anti-civilization philosophy and really sickened on a daily basis by my culture. On the ranch, I had to decide if I was a bad person for wanting refrigeration. That might sound silly, but that’s where this philosophy can take you.

I mulled over concepts of purity and extremism, the anti-civ belief system that pretty much all human activities outside of subsistence-level hunting & gathering are killing the planet, and my own experience growing up in overwhelming prosperity (even in the lower-middle class) and yet feeling that everything was very empty and meaningless… And in the end of all that mulling, I felt so defeated and helpless, it would have been easy to walk away from the whole thing completely jaded.

What I seek in my life now is balance. I don’t think it’s evil to want to be comfortable. I still find the suburban McMansion lifestyle disheartening, but there are alternatives aside from a cabin in the woods. There is a middle ground between being constantly entertained and unaware and being overwhelmed by awareness and guilt.

We’re never going to be an agrarian nation again, and yet our various systems are so unsustainable, we would be wise to seek alternative while we can. Because societies change in slow stages, there must be room for growth and learning between the extremes of producing nothing for yourself or your community and producing absolutely everything. That’s what I’m trying to find and what I’d encourage others to seek, as well.

Thanks so much for sharing your story, Chandelle! This was so, SO interesting! Have any of you ever lived off the grid? Do you have any questions for her?

P.S. You can choose to want less + True Story: I don’t have a cell phone