True Story: I’m a woman who plays on a men’s sports team

This is one of many True Story interviews in which we talk to people who have experienced interesting/challenging/amazing things. This is the story of Amanda and how she came to be part of an all male rowing team. 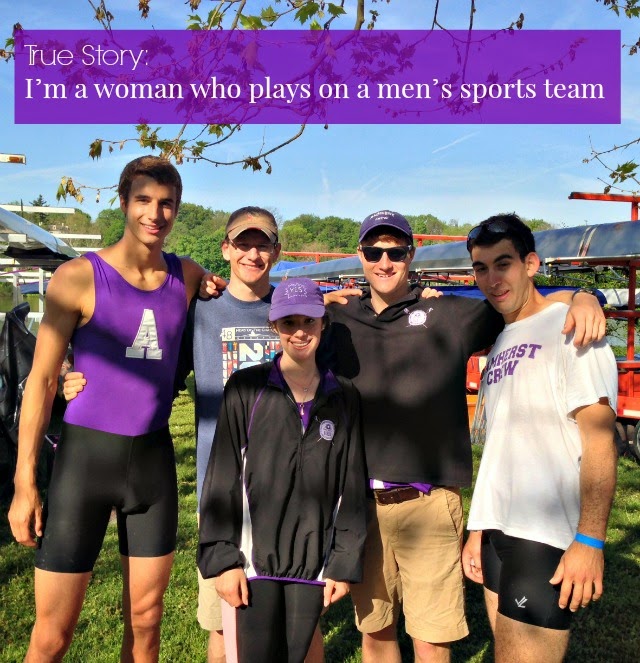 Tell us a bit about yourself!
My name is Amanda Dillon, and I’m from Palo Alto, California! I’m currently a senior and full-time student at a small liberal arts college in Massachusetts, which is how I got started with crew in the first place. For fun, I write and design for my blog, Ex Vitae, which I launched at the beginning of this academic year. I’m also writing a senior honors thesis, so it’s safe to say that I’m pretty busy most of the time 🙂
For those of us who don’t know, what does Crew consist of?
I like to describe crew as the quintessential team sport. Crew, also known as rowing, is basically the sport of rowing boats. At my college, we row boats of either 8 or 4 rowers with a coxswain, who steers the boat and commands the crew. The coxswain – that’s me! – doesn’t actually row; we drive the boat and execute race strategy. In the fall, races are between 4-6 kilometers in length, and are usually done against the clock with different heats starting at different times. In the spring, however, the races are 2K and done head-to-head. Very exciting!
How long have you been rowing crew?
I’ve been rowing crew for three years now. When I was a freshman in my first few weeks of college, I was approached by a very tall man in my dining hall who looked down at me and said “Hey you! Want to be a coxswain?” And the rest is history!
Does your university have a women’s crew team?
Yep. I was actually on the women’s team for a semester in my freshman year after being on the men’s team, but decided after that experience that my coxing style was probably better suited to the guys. Coxswain placement is about fit with the crew and weight. Right now, I weigh around 123 pounds, which is right around the men’s weight minimum (the women’s minimum is 110 pounds). Any less, and I would have to carry sand with me in the boat to level out. Coaches generally like their coxswains to be right at the weight minimum, so I’m pretty well-suited for the men’s team at this point.
What did you have to do to get a spot on this team?
Crew is a classic college walk-on sport, so I didn’t have to try out to gain a spot on the team. However, right after I joined, my coach pulled me aside and asked me to jump right on the men’s varsity team due to a shortage of varsity coxswains. This is pretty unusual, as most freshman row exclusively with other freshman on the novice team for their first year with the sport. I was skeptical and extremely nervous, but I decided to challenge myself and take the plunge.
How did your teammates react when they discovered there would be a woman on their all-male team?
It was certainly peculiar for the guys to have a freshman girl (who didn’t know anything about crew!) bossing them around, and they were understandably a bit rough with me at first. My first week on the water, I cried every single day in the boat because I had no idea what I was doing and the guys had a tendency to get vocally frustrated with me. However, after we all got used to each other, we ended up having a fairly successful season.My family didn’t understand what I was doing at first – it took a whole semester to convince my sister that I was actually on the team, considering that I didn’t actually row! After explaining about the weight and fit components of being a coxswain, I think they started to understand how I could be a girl on the guys’ team…although they probably still think I’m crazy! 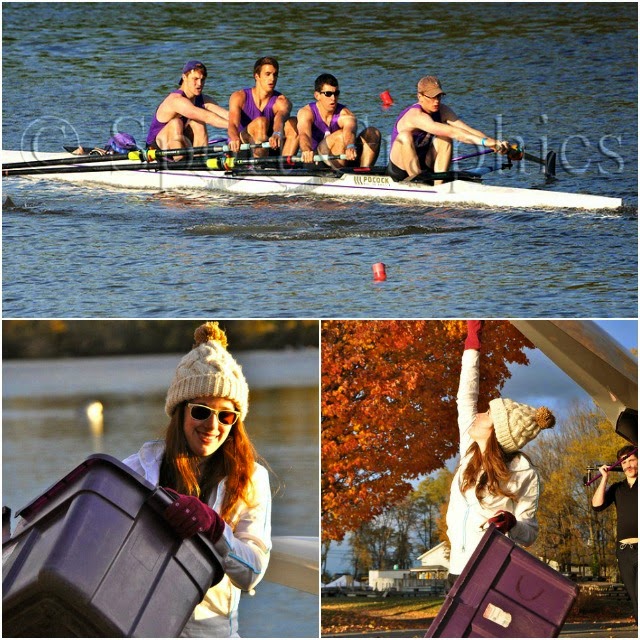 When your team competes, how do the your competitors react to you?
Crew is definitely a gentleman’s sport – I’ve never been treated with anything other than respect by my competitors. It’s harder, though, to explain my position to my friends and family. For the first season I was on the team, a number of friends asked me if I was on the men’s team because I wanted to date the rowers. Nothing could be farther from the truth – that would be like dating a brother! – but it’s a question I still get asked fairly frequently. It’s too bad, because I feel that this assumption devalues my position in the boat and completely ignores the dedication and hard work that I put in every day for my sport.
Tell us what an average day at practice looks like.
For my team, practice consists of a 2.5 hour row, 6 days per week, either in the morning or in the afternoon. Our boathouse is located 7 miles off campus on the Connecticut River, so we generally load up vans a half an hour before practice actually starts and head over together. From there, we offload the boats, launch from the dock, and go through a series of technique drills and power pieces.Rowing is considered to be a complete exercise – almost every muscle in your body is worked in the course of one stroke – and it requires strict attention to both muscular and cardio strength. Some days are spent working solely on particular technique, and others are made up of mock races to get the rowers into shape.
What have you learned from this that you can apply to other parts of your life?
Being a coxswain has definitely provided me with valuable assertiveness training that I wouldn’t have received otherwise. As a freshman girl, I struggled with voicing my opinion and standing up for myself. Being a coxswain, especially on the men’s team, essentially forces you to be strong and decisive. Otherwise, you degrade the trust between you and your rowers, and the results are not nearly as strong.Being on the crew team has also been a lesson in collaboration. To make a successful boat, you have to have 5 or 9 people who are willing to put their differences aside and work together toward the common goal of speed. It can be difficult to reconcile the personalities of 4 other people! However, the natural leadership ability that you gain from coxing is incredibly beneficial in situations where two rowers don’t see eye to eye. I wouldn’t trade the hours I’ve spent with my team for anything, and I am grateful every day for this motley crew of a family I’ve cultivated at school. Almost nothing could be better!

Thanks so much for sharing, Amanda!  Do you guys have any questions for her? Have you ever played a non-traditional role on a sports team?

P.S. Two more sporty interviews: I’m a professional athlete and I broke a world record – I was the youngest woman to run a marathon in every state