True Story: I Almost Got Divorced 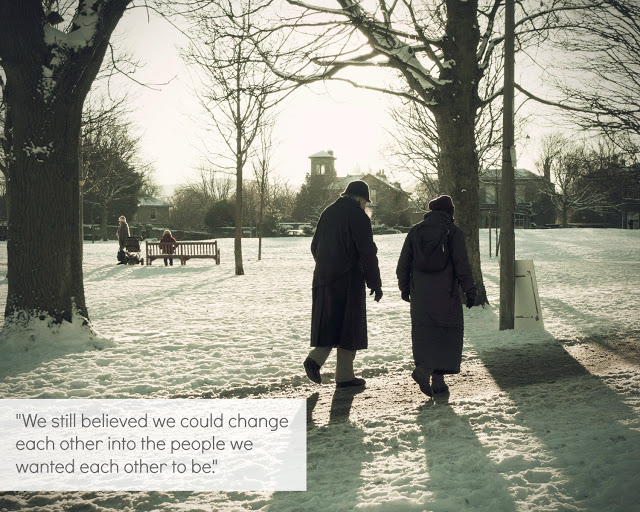 This is one of many True Story interviews in which we talk to people who have experienced interesting/amazing/challenging things. This is the story of Carolina and her relationship with her husband, Sean.

Tell us a bit about yourself!
I am from Bogota, Colombia, born and raised there and in Westport, Connecticut. In November, I relocated from NYC to London with my husband. I’m a 29-year-old financial analyst, a blogger at GirlHabits, and a cross-fitter. I’m on a mission to do a pull-up by year end and to eliminate all of my credit card debt and half of my student loan debt.

What’s your relationship history? What were your feelings about marriage and divorce growing up?
My relationship history is pretty limited. I was very insecure in high school, so I barely dated. I dated one guy before I met my husband and in between “breaks” with my husband, I went on a few dates with random guys. My dad and mom are still married, but both my grandparents are divorced and so are most of my aunts and uncles. My feelings of divorce were that it was always an option, if things went awry. And my feelings of marriage was that it was a beautiful thing, albeit a bit frustrating for both parties at some point or another.

Tell us about how you met your husband!
I was a freshman at Fairfield University and I spent a lot of time at the library. A couple months into the school year, one of my really good friends got a boyfriend and she wanted time alone, and promised to hook me up with whoever I wanted. Sean always stood out, as he dressed better than most freshman boys and I found him extremely good looking. So I told my friend “him!” and she got to work. At some point, we were crazy enough to leave a note on Sean’s car (I was transferring schools), so I had no pride, as I figured, if it didn’t work out, I would never see him again.

I still transferred schools and Sean and I were together for five years before we got married. Aside from a few breaks here and there, we managed to make our relationship work long distance. Once I moved home after college, we remained together and that’s when Sean started talking marriage. I knew my mom wasn’t a fan of marriage with him and I still felt we were very young, so I tried postponing this decision for about a year. At one point, Sean got fed up and broke up with me, so I was forced to make a choice. And my choice was be with him, so that’s when we approached both of our parents and told them about our decision. Looking back, we were so young and naïve when it came to dealing with our parents and our choice to be together.

Our wedding was pretty much hell. In Colombia, the wedding is organized by the bride’s family and my mother gave us a party according to her wishes and preferences. Although the party was beautiful, we had no say in the music, the food, or the venue. The only thing my mom and I agreed on immediately was the dress (and it was absolutely beautiful). Sean and I wanted a bigger say in the wedding and struggled with not having more input, but because we weren’t contributing money, we were forced to let my mom take control.

What were the issues that lead to your almost-divorce?
Oh, if I could enumerate them all! There were many issues that led to our almost divorce, but I think two of the biggest ones were communication and expectations. We weren’t giving each other a chance to communicate properly and openly without judgement. We still believed we could change each other into the people we wanted each other to be; Sean believed that I could be more of a homebody and I believed that he could turn into a spontaneous spur-of-the-moment partner. We also weren’t loving each other unconditionally, nor actively choosing to be together on a daily basis.

There were a couple issues that arose while the above was brewing and that was the tip of the iceberg that took us from a comfortable couple to a couple on the brink of divorce.

How close were you to divorcing your husband?
I gave myself a deadline and told myself that if things didn’t improve by April (when our lease was up), I would break up with Sean.

I was so distraught that Sean and I had strayed so far from what I knew we were capable of that I started binge drinking in December. I couldn’t handle my reality so I’d go out with colleagues and stumble home at 2 or 3 A.M in the morning. Obviously, this exacerbated the situation, but I didn’t know what else to do to express that I was reaching a personal breaking point. One of the times, I drank so much the night before that I threw up at work twice. Another time, I had bruises on my body from what I can only assume was a fall (or two) while I was walking home. Another time, I woke up in the bathroom, vomiting all over myself, with Sean taking care of me.

It was at this point that Sean issued an ultimatum and said that even if we divorced, he’d be worried about me and my behaviour. At the same time, he was also in contact with my mother (without my knowledge), asking for advice as to how we could move forward from this dark spot.

What steps did you two take to work through your issues?
We took baby steps to work through all of our issues. We held weekly talks at a local tea shop and just talked through our days and our week, and anything that was on our mind regarding our relationship. I stopped drinking as heavily as I had been doing in the past. I stopped talking to my family about my relationship and started to respect it as a sacred entity in itself. Sean was more open to a different type of relationship than the one he envisioned in the past.

Why did you decide not to get divorced?
We decided not to get divorced because we wanted in. Divorce would have been the easy way out, so we both re-chose each other. Sean has had an extremely positive impact in my life, and I respect and aspire to be more like him. He also showed me a different way of life, and I cherish that. I come from a pretentious family that I adore, but I shy away from some of their shenanigans. My mom hated leftovers; I have grown to love them. My family is big on talking; Sean and I are big on doing. My family doesn’t care for working mothers; Sean doesn’t care what I choose, as long as I choose it with him. In a way, he’s allowed a side of my personality to flourish that never did in my teens or early twenties.

How did the people in your life feel about your decision?
My family knew what I was thinking of doing and they were extremely supportive once we chose to move ahead with our relationship. My friends that knew were extremely happy that we chose to work through our issues.

Having worked through your issues, how do you feel about marriage/divorce now?
I feel that marriage is unconditional love. This might sound silly, but I also make a conscious choice to choose Sean every single day and to remind myself that he is my best friend first and foremost. And sometimes I fail. And I’m still not perfect and neither is he, but we rarely fight anymore and just let each other be when we’re having bad days. I have also found that adding a term of endearment whenever I address him makes me more prone to being sweet and that never hurts.

I feel that divorce is a window that should be kept tightly closed at all times.

What advice would you give to someone going through something similar?
I would tell them to be patient and to give it time. One of my older friends used to tell me that “time is your best friend, as it reveals all things.” I would also tell them that reaching rock bottom is not necessarily a bad thing, as you can only go up from there.

Thanks for sharing, Carolina! Are any of you divorced? Or have come close to leaving your partner?

original image (without text on top) by sarah natsumi moore, for sale here