True Story: I Have A Toxic Relationship With My Mom 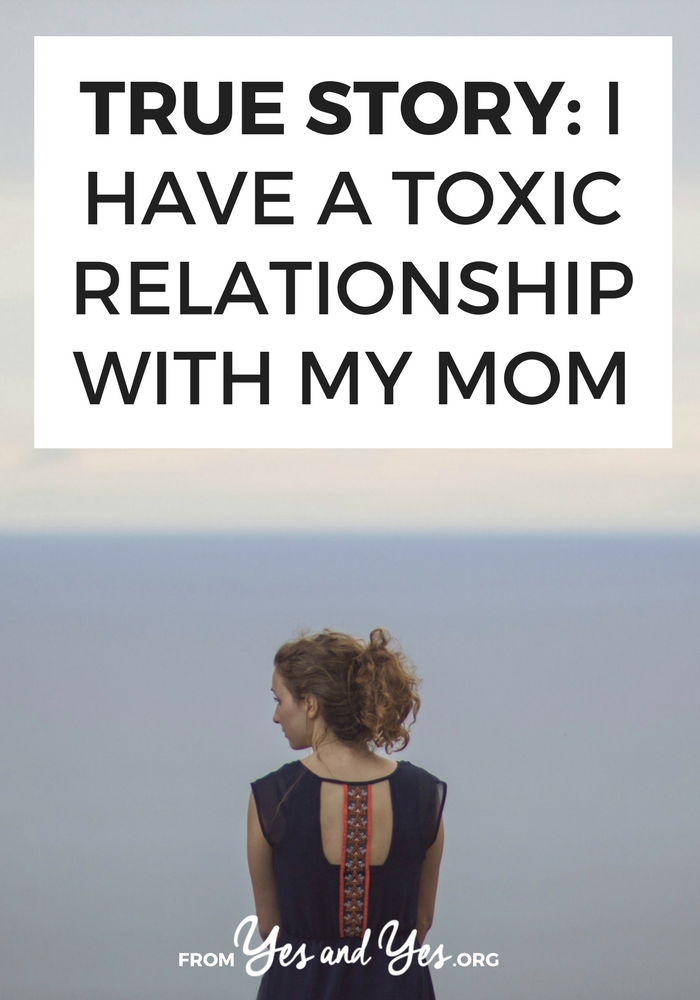 Tell us a bit about yourself.
My name is Amy and I’ve lived in Michigan all 27 years of my life. I work as a graphic designer at an ad agency by day. By night and weekends, I can usually be found with my boyfriend remodeling our 100-year-old farm house, photographing anything and everything or just spending time with my friends.

What is your relationship like with your mother?
My relationship with my mother has never been really great or even good, for that matter. Growing up, there was a lot of haste in our household; a lot of arguing, blaming and sadness.

Anything that I ever did was just never good enough for my mother; anything from mopping the floors ‘the wrong way’ or not calling her as often as she would have liked. I spent many years dreading every conversation with her and had lots of meltdowns before a visit with her.

How old were you when you realized that your mother wasn’t like other mothers?
I think deep down, even as a small child, I have always known that there was something about my mother that just wasn’t right. I was always looking for any excuse to be away from her and when I turned 15 I couldn’t wait to be 18 so I could move out.

When I was 16-years-old my boyfriend had come over to take me on a date, my mother asked me to put away my shoes and I told her that I would get to it in a few minutes. A few minutes later she completely freaked out on me, yelling and screaming at me for not listening to her and not being good enough to even put my shoes where they belonged.

She grabbed me by my shoulders and shook me as hard as she could just yelling and screaming, all while my boyfriend stood watching in fear.

When I turned 18, I did move out and that’s when my relationship with my mother went even more downhill. We would go for a while and I would assume that things were fine, but then out of the blue I’d receive a phone call or an e-mail blaming me for her depression “how could I leave if I loved her at all?”

How does your mother interact with other people?
To those who don’t know my mother well think that she is just the sweetest, most gracious being. In truth, she’s very manipulative and very good at hiding her true colors.

She’s never really had a lot of friends; when someone tells her something that she doesn’t want to hear, that’s just the end of that relationship, period. She clings to those who give her and tell her what she wants.

Do you have any idea why your mother behaves like this?
There have been a lot of women on my mother’s side of the family that have suffered from mental illnesses. My mother has always suffered from depression and although I’m no doctor, I’d say that she has some form of mental illness; whether it’s borderline personality disorder, bipolar, or just plain narcissism I have no idea.

How has your relationship with your mother affected other aspects of your life?
I have always struggled with my self-esteem; I am constantly hearing my mother’s voice in my head putting me down or laughing at me.

Have you confronted your mother about her behavior? How do you deal with your mother now?
Not too long ago, I received one of many e-mails from my mother telling me how awful I am, telling me that it was my responsibility to help her out of her depression. I responded that I was just not going to accept her behavior anymore. I told her that she needed to see a counselor because she needed help.

Shortly after that e-mail dialogue she became belligerent toward me and threatened to kill herself (she’d threatened before but this time she went farther).

I filed a petition to have her committed, but she manipulated her way out of that. After that, she threatened me, she blamed me once again for her depression and denied ever threatening to kill herself. So I gave her an ultimatum; I said she could either get the help that she needs or she could no longer consider me her daughter. She chose the latter.

How do the other people in your life feel about your mother and your relationship with her?
My boyfriend, my step-father, and my friends are completely supportive of my decision to no longer have a relationship with my mother. My step-dad is my biggest supporter, he lived with her for just as long as I did and he too knows her true colors.

It’s difficult sometimes because I know that to people who don’t know the entire situation are judging my decision; how on earth could I completely walk away from the woman who gave birth to me? The woman who raised me, her only child?

But I know the truth as do the people closest to me; I’m just not going to let someone manipulate me, emotionally abuse me and lay burdens all over me regardless of the fact that she gave birth to me. I remind myself every day that my decision was right and it doesn’t matter what anyone else thinks.

What advice would you give to someone struggling with something similar?
My advice to anyone in a similar situation is to realize that it’s not your fault.

You do not need to listen to anyone who emotionally abuses you.

You do not need to spend time with people who treat you poorly and it doesn’t matter if that person is a stranger, a friend, a spouse, a relative or even your parent.

You need to do what is best for you. Surround yourself with happiness and focus on the good in life. See a therapist; they help you to see a new perspective.

I’ve found the book Toxic Parents  – Overcoming Their Hurtful Legacy and Reclaiming Your Life to be very helpful.  Or visit Toxic Mom Toolkit or look up Toxic Mom ToolKit on Facebook – there’s an entire community of people in similar situations; you are not alone. If you think (or know) that your mother is a toxic mom remember that it’s not you, it’s her.

What’s your relationship like with your mom?  Any questions for Amy?

P.S. How to deal when people disappoint you

P.P.S. If you’d like more help navigating the relationships in your life, I have a whole Pinterest board devoted to them.