How To Become Vegetarian Without Annoying + Alienating Everybody 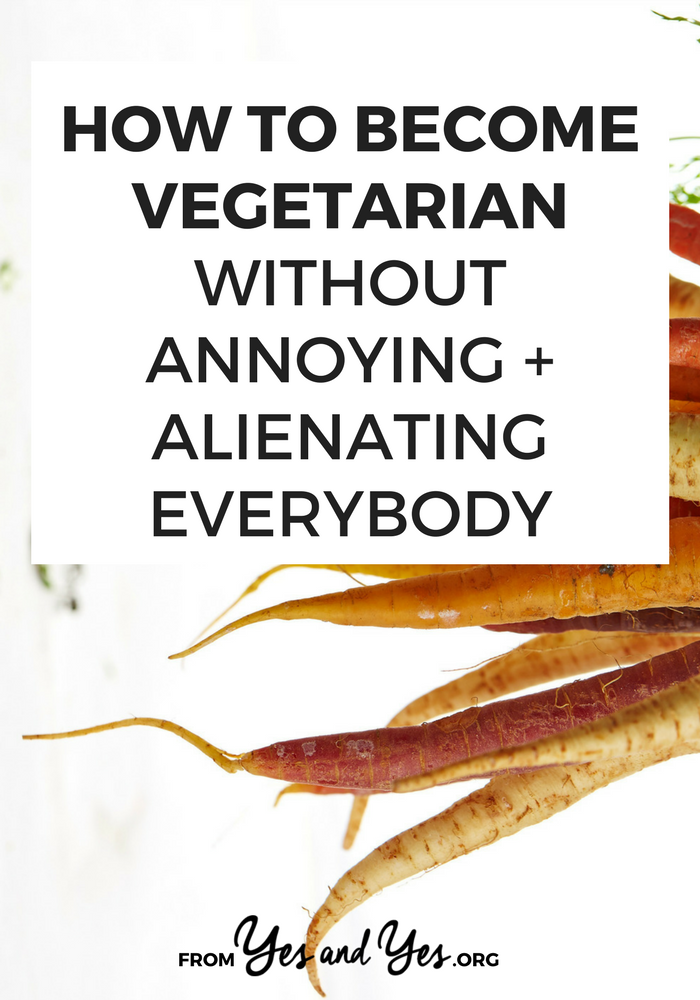 Dear Sarah,
I am a vegetarian who lives in a small town. We are starting to get more soy/tofu products but I still feel limited when it comes to food. I was wondering, what are some of your favorite meals/recipes? How do you deal with being a vegetarian in a non-vegetarian world?

Dear Sarah,
Why did you become a vegetarian? I’d love to read a post on that.

Just like starting anything new, it’s good to slowly ease into it – eating a few meatless meals every week, experimenting with fake meat products, avoiding the meat aisle at the grocery store.

While it’s not the case for me, a lot of new vegetarians report feeling a bit tired and mopey when they’re trying to get off The Meat, so make sure you’re getting enough sleep, taking your vitamins and being a bit more gentle with yourself.

Knowing How Much Protein You Need

Before you remove all the meat from your diet, it’s a good idea to calculate what your daily protein intake should be.

It varies significantly from person to person and if you’re Suzy Beansalot, then you might not even need to up your protein intake. The Fitness Pal app is a great place to run these numbers and keep track of how you’re doing.

I grew up in the sort of town that didn’t even have basil in the produce department, so you can imagine that meat substitutes were nonexistent. But you can get plenty of protein from stuff that’s widely available, even in Middleofnowhere, MN.

Beans are super cheap and provide a lot more protein that tofu, even! I love this super simple black bean soup, beans and rice, hummus and vegetarian chili. Also, I cannot recommend the Fantastic brand boxed chili mix enough – even if it creates gas so bad that you can’t eat if for lunch at the office.

Tofu does have a decent amount of protein in it, but it can be hard to find and a bit of a pain to cook with. If I’m using it, I usually use the silken variety and incorporate it into yummy desserts like chocolate pudding or tofu cheesecake.

(I’m totally that person who brings tofu dishes to small-town potlucks and then when people have complimented me on them I get all “Ha! There was tofu in it!” And then they never speak to me again.) It’s also important to know that soy is an endocrine disruptor so you probably don’t want to eat it at every meal.

These days, quinoa is widely pretty widely available. Quinoa is cool for multiple reasons. A) it is an ancient Andean grain B) it is the only non-meat complete protein C) you can eat it all the time, with everything, or maybe even with a fox in a box. I even eat it for breakfast!

You can use it in place of couscous in any recipe, as a side dish or a main. I really love this recipe with garlic and thyme and this one for quinoa vegetable soup.

If you’re really rushed for time and protein, just drink a protein shake. Really! There are actually some yummy ones out there these days. I quite like the chocolate and vanilla varieties of Body Fortress. I swear that if you can get past that ridiculous name, it’s really pretty good!

If you give up meat, there’s also a chance that you won’t be getting enough iron. You can certainly take iron supplements, but for some reason they give me terrible stomach aches, so I opt out.

Instead, I (try to) eat heaps of spinach, nuts and the occasional spoonful of molasses. I love this spinach strawberry salad and this spinach and pasta recipe. Here’s a list of other iron-rich foods if spinach isn’t your bag.

Eating Out As a Vegetarian

Not eating out is one of my secrets to living a champagne life on something of a beer budget, and being a vegetarian makes it even easier. When you’re vegetarian and you’re eating at a traditional American restaurant, you’re usually limited to soup, salad and pasta.

I’ll be damned if I’m going to pay $12 for something I could make at home for $3. As such, I usually opt for Asian, Indian or Middle Eastern food instead. It addition to being more veggie friendly, it’s usually cheaper, more fun, more flavorful and healthier, too! That’s, like, a win/win/win/win situation.

When People Ask You About Being Vegetarian

If you made the choice to become a vegetarian, you probably had a good reason for it, right? And, on multiple occasions, you will surely be called upon to discuss your decision.

There are heaps of reasons that people don’t eat meat: maybe they want to save money, lose weight, reduce their carbon footprint, observe their faith’s teachings on the subject, support animal rights or, like me, they just don’t like meat.

Whatever your reason for going veg, you should be prepared to talk about it in a calm and articulate manner. Because if you ever go to rural Minnesota someone will probably call you a Gawdam Hippie and tell you that you’re personally responsible for the plight of the failing family farm.

People are often genuinely interested to know about your choice and it’s nice to be able talk about it in some manner other than “but baby cows are soooooo ceeeee-ute!”

Now. This is certainly not the case with everyone, but (like new converts to anything) the newbie vegetarian can occasionally be a total pain in the ass.

You know who I’m talking about. That girl who would sit next to you at the cafeteria table in 9th grade while you ate pepperoni pizza and shrill, “It’s not any different than eating your cat! I bet you’d do that too, wouldn’t you!?” Or that co-worker who insists on telling you that marshmallows are made from cow hooves.

And while these arguments carry some weight, they’re not going to win you any dinner party invites. We all have our causes. Some people picket. Some people donate money.

Some people change their eating habits. Who am I to say that my particular habits are any better than a meateaters? I could be eating all the veggies I want and drive a gas-guzzling SUV, shop exclusively at Wal-mart and kick puppies in my spare time. Eating habits do not a martyr make.

When people ask me why I’m a vegetarian I explain that I’ve just never really liked meat and that since I’ve been a vegetarian for so long, I’ve gotten out of the habit of eating it.

I might also add that since going veggie I’ve learned that avoiding meat has a huge impact on my carbon footprint, which is a pleasant side effect to something I was already doing.

Are you a vegetarian? Have you ever tried to be one?