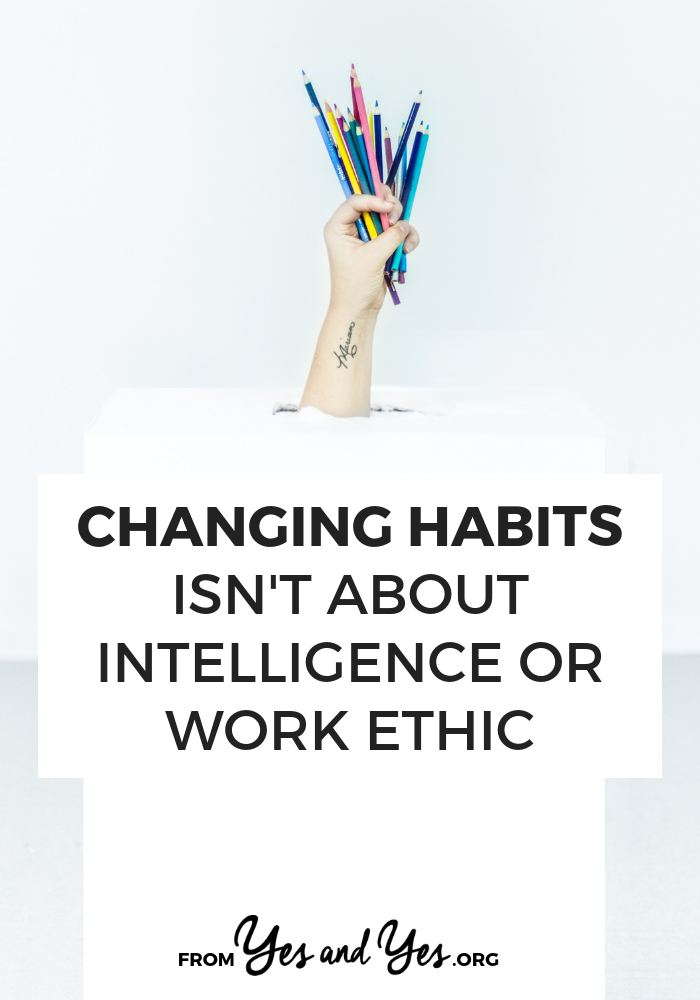 “Ughhhhhhh. Why can’t I break my mindless Instagram habit?!! I trained for a marathon, I paid off all my school debt, I graduated with a 3.9 but I can’t stop scrolling through strangers’ photos? WHAT IS WRONG WITH ME I HATE EVERYTHING.”

Raise your hand if you’ve uttered something like this within the confines of your mind!

(Everyone, ever raises their hand.)

Maybe Instagram isn’t your vice of choice. Maybe the bad habit you can’t kick is online shopping, smoking, mean-spirited gossip, leaving a mess everywhere you go, or eating an entire bag of pizza rolls as ‘second dinner’ every night.

Not that I’ve ever done that.

Whatever the bad habit, it’s very possible that you’ve had some version of this conversation with yourself. The conversation where you hold up your accomplishments and wonder why you can do something so seemingly hard – get the dream job, graduate with honors – but you can’t stop stalking your ex on Facebook.

If you’ve ever done that:Good news/bad news: Habit change has nothing to do with intelligence or work ethic. We can’t outsmart or outwork our bad habits. Click To TweetLarry King had terrible spending habits and declared bankruptcy twice. President Obama struggled with a smoking habit for years. Oprah Winfrey has been very open about her challenges with fitness and eating habits for her entire career.

I think we can all agree that the above mentioned humans are smart and hard working.

So how do we break bad habits if we can’t out-smart or out-work them?

I’m afraid the answer is too long for one blog post. It involves motivation, neurology, self-awareness, and developing a process that works for you. (Shameless plug, we cover all these tools in Habit School!)

What I can tell you is three more things very few people are saying about breaking bad habits and building good ones.

3 surprising things I want you to know about habit change

1. There’s no such thing as laziness

What now? Yes. If you’ve ever believed that you’re “too lazy” to break a bad habit or build a good one I’m here to share to tell you that laziness isn’t, uh, really a thing.

What often looks and feels like laziness is actually procrastination, anxiety about the outcome, or confusion about where to start.

Sure there are times that we simply don’t want to do something – who truly wants to empty the dishwasher? – but most of our ‘laziness’ is actually something else entirely.

2. Much of the narrative around habit change is one-size-fits-all

If you’ve ever read a listicle about breaking a bad habit or building a good one, said listicle has probably assumed:

* You’re trying to go to the gym more
* Obsessively measuring + tracking your progress works well with your particular brain
* Using your phone or computer to obsessively track said progress poses zero issues
* You’re already getting eight hours of sleep
* The people in your life are wildly supportive of the habit you’re changing
* You’re not tempted by anything, ever
* What’s a trigger? Don’t know her, never met her

Oh, what’s that? You mean that you’re trying to change a habit that’s NOT weight-loss related? You feel discouraged when you don’t see progress after, like, three days? Using a habit-tracking app on your phone leads you down an Instagram wormhole that just makes you feel bad?

3. Much of the narrative around habit change, uh, ISN’T TRUE

Fun fact: that ’21-days to a new habit’ stat we see floating around is totally, completely false. On average, it takes people 66 days to truly cement a new habit. And that can vary from 12-265 days! And it’s different from person to person and habit to habit!

So, if you tried to build a new habit for 21 days and it didn’t stick – it’s not that you did it wrong. It’s just that you’re probably only 30% of the way there.

The truth is, habit change is both harder and easier than we’ve been lead to believe. It’s not just a habit tracker app and doing something every day for three weeks.

Like a lot of things in life, habit change is simple; it’s not necessarily easy.  Knowing that you’re not ‘doing it wrong’ is a huge step in the right direction.

Have you struggled to make habit change stick? Or fallen for the 21-days myth? If you’ve successfully changed a habit, tell us how you did it in the comments!

P.S. The wait-list for Habit School is here!

Photo by Lucas Sankey on Unsplash