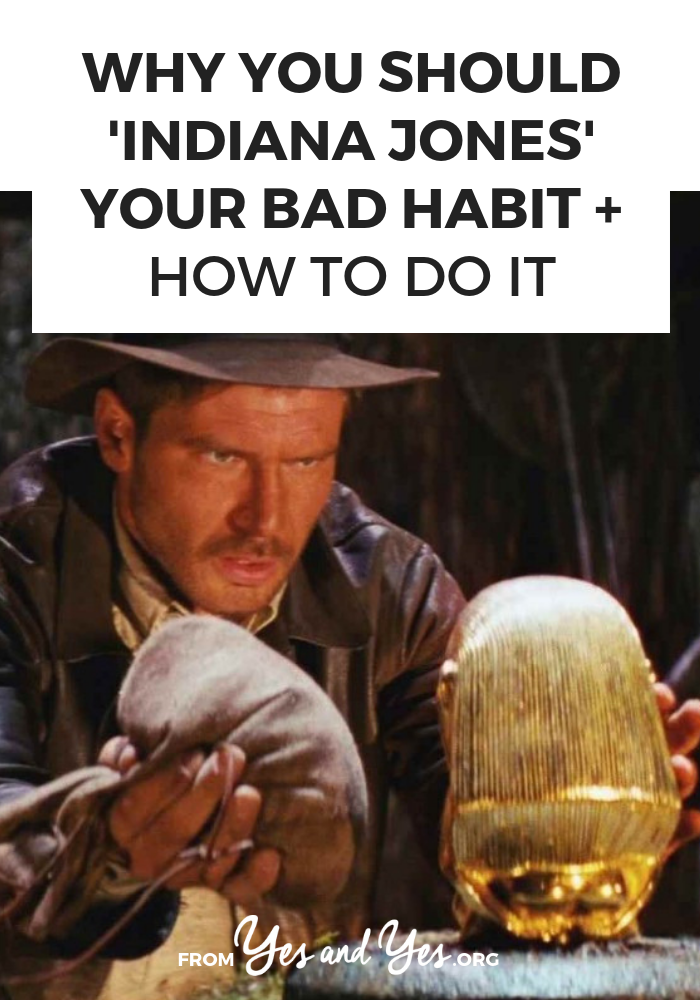 “You know what? I think I’m ready to do it.” We’re driving back to Minneapolis after a long cabin weekend and my never-ending yammering about habits and goals has my friend all riled up.

“I’m gonna do it for real this time,” he nods. “I’ve got this terrible habit of checking my phone first thing in the morning and I’m going to go cold turkey.” He passes an old Nissan and takes a sip of his gas station coffee.

“I’m going to stop checking my phone and start meditating! Yes!” He slaps the steering wheel.

Unsurprisingly, this makes zero sense to my friend. So I elaborate.

“You’ve seen Indiana Jones And The Raiders Of The Lost Ark, right?” (This is a trick question because we’re both children of the 80s and OBVIOUSLY HE’S SEEN IT.)

“Indiana Jones doesn’t just, like, snatch the golden idol and leave that pedestal empty. He replaces the it with a bag of sand that’s about the same size and weight.”

Now, leaving aside the fact that it’s, uh, pretty problematic that Indiana Jones is stealing ancient artifacts from indigenous people and his sandbag swap triggers a series of booby traps, I think what he does nicely illustrates something we should do when we’re trying to break bad habits. Instead of trying to break a bad habit cold turkey or replace it with something painfully virtuous, what if we swapped in something slightly less ‘bad’? Click To TweetHere’s the deal: each of our bad habits take up a specific space in our lives and serves a certain purpose.

Checking your phone first thing in the morning takes up the ten minutes between 7:30 and 7:40. It might serve to help wake you up and give you a spike of serotonin before you have to face the day.

Some people are great at quitting things cold turkey! If you are one of those people you can stop reading right now and go read this post about healthy travel snacks!

But for most of us, our brains, bodies, and schedules don’t know what to do with themselves if they’re not checking that phone in the morning or eating something while watching Netflix. If there’s just a hole where the ice cream used to be, we’re a million times more likely to go back to the ice cream.

We’re much more likely to break a ‘bad’ habit if we replace it with something ‘less bad’ – if we swap a bag of sand for that golden idol.

I put those quotes there because ‘bad’ is subjective and most of our habits don’t hold moral value. Checking Instagram 80 times a day doesn’t make you an unkind person. Mindlessly eating pizza rolls while binge-watching Netflix doesn’t mean you’re unethical, rude, or inconsiderate.

Only you can say which habits affect you negatively. Once you figure that out, think of a ‘less bad’ habit you could swap for your bad habit. What’s something you could do that feels and looks similar to your bad habit but is slightly better for you?

See?! So much easier! So much more doable! Habit change isn’t always easy, but it’s totally possible and it’s a lot more possible when you’re gentle with yourself and set realistic expectations.

But I want to hear from you! Have you ever Indiana Jones-d a bad habit? What did you swap in? Tell us in the comments so we can try it, too!

P.S. The LIVE version of Make It Stick Habit School opens for enrollment on January 6th. Click here to join the wait list!