True Story: I tried to solve my uncle’s murder by myself 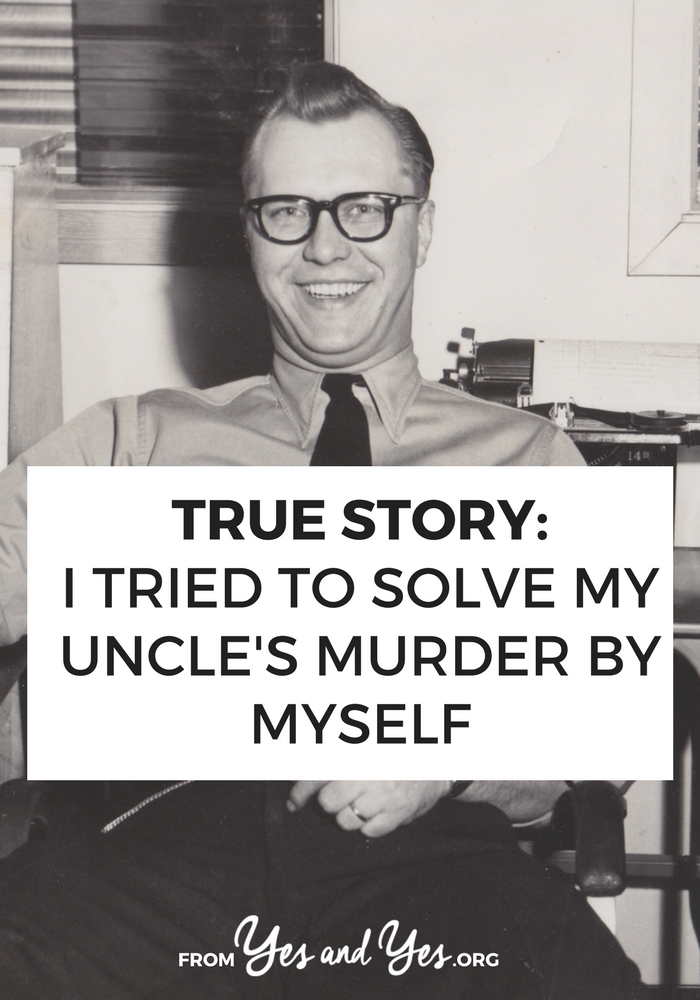 Have you ever wanted to try to solve a crime by yourself? If you’ve ever watch an episode of 48 Hours or listened to the My Favorite Murder podcast, you’ve probably considered it.

But Dorothy really, actually tried. For years. This is her story.

Tell us a bit about yourself.
My name is Dorothy. I grew up on a dairy farm in Waukesha, Wisconsin. I’m in my sixties now and I love to ski, have long conversations with friends, go to theater and films, and hang out with my daughters.
What was your uncle like?
My uncle LaVerne Stordock was an outgoing guy who made friends easily.  I have found this out from interviewing scores of people who knew him, plus my own memories. He liked to tease people.
After high school, he joined the military to serve in World War II. Later on he was sent for the Korean Conflict and mostly worked as a detective in drug enforcement.
After WWII, he became a police officer in Beloit, Wisconsin and worked his way up to Chief of Captains.  After that, he sat for a demanding test and was one of only five who was selected to be on a elite investigation unit under the Attorney General’s office, and finally worked with the State Medical Examiner’s Board.
Most of his career was in detective work and much was undercover. When he started working in Madison, he had a torrid affair with Suzanne.  They both got divorced, she from her third husband, and got married.
How did he die?
He was murdered, shot in the left temple by a Mauser 8 mm converted army rifle. Half his brains splattered across the bedroom wallpaper and below. It was seven years after he met Suzanne.
What is Suzanne’s version of events?
Suzanne’s version at the time: She had a psychotic break, didn’t know what she was doing, and picked up a huge and complicated gun (by hers and others admission, she had never picked up a weapon before). With one perfect shot, she killed my uncle, hitting him in the temple, in their second floor bedroom.
Later on, around 1974, she told the man who bought the house from her that my uncle went to the basement, saying he was going to kill himself.  She ran after him, there was a struggle, the gun went off, and my uncle was killed.
Your uncle’s wife was sentenced to 11 months in a mental hospital for your uncle’s death. Why?
Suzanne and her son both had fingerprints on the weapon.  They were going to arrest David. Suzanne said she would confess IF they gave her an insanity plea, which she ultimately got.

A couple of months before the murder, the state had changed the law to make it much easier to get out of a mental institution after a crime.  She was supposedly “completely cured” of Chronic Paranoid Schizophrenia and let out of the hospital after 11 months. She got all my uncle’s assets, including his life insurance, and even got double indemnity.

If you’re unfamiliar, double indemnity is “a clause or provision in a life insurance or accident policy whereby the company agrees to pay the stated multiple (i.e., double, triple, etc.) of the face amount in the contract in cases of death caused by accidental means.”

What did she do after she was released from the hospital?
She had enough money now she she didn’t have to work, so she went back to school and got her bachelor’s, masters, doctorate and a law degree.
At what point did you begin to think “This seems fishy”?
My grandmother and aunt went to what they thought was going to be the final trial. It lasted less than 15 minutes and the arguments for giving her the insanity plea did not make sense.  Suddenly it was over and everyone else got up to leave, but they sat there wondering, “What?”
What did you find out when you started to dig?
I found out that the forensic evidence had almost no relationship to what got played out in court. It was shocking to me, and it’s even shocking to the current detectives at the Dane County Sheriff’s office.
Have you approached anyone about this – lawyers, police, judges?
The police found the records and could not believe how the case went down.  Most of the attorneys had died, but I did track down someone working tangentially on the case, who also questioned its outcome.
I interviewed one of the first officers on the crime scene, who said, “We were told when we arrived that Suzanne had called the Sheriff in his home before we got there. I don’t know what deal she made with the Sheriff, but I know that case did not go down the way it should have.”
Have you talked to Suzanne?
I went to her house four times and spent 14 hours interviewing her.  The first three times went well, but during last visit, she got angry, sensing I might not be writing as a publicist would, and was filled with rage. I left quite frightened and never went back.
Where do things sit now in terms of your family and justice?
I started this search with my cousin Shannon (my uncle’s daughter from his first marriage), just wanting to know WHICH person murdered my uncle.  As I got more and more evidence, it became a challenge for me to find out as much of the truth as possible.
Though there are still a few unanswered questions, I found out most of the truth and that of itself brings a sense of justice.  At least we know what happened.  We will never have court justice, but knowing the truth is quite powerful.
Has this affected the way you feel about our legal system?
I still believe in our system, but I think we have to understand the rule of law will be fragile unless we make sure there are cross-checks in the system. We need to make it more difficult for people to “play” the system.
What has this taught you that any of us could apply to our daily lives?
It might seem obvious, but be careful who you marry.  Suzanne would go after my uncle with broken bottles and smash all their dishes against the wall. At our family gatherings, she would explode like Linda Blair in The Exorcist. Stay away from people like that. You might think you can help them, but most likely you will suffer.
In terms of the law and authority, if you have doubts about how something is being handled, speak up!
Thank you so much for sharing your and your uncle’s story, Dorothy. Do you guys have any questions for her?
P.S. True Story: I married a convicted murderer

Photo by Andrew Worley on Unsplash