True Story: My Husband And I Have Lived In Different Cities For More Than Half Of Our Marriage 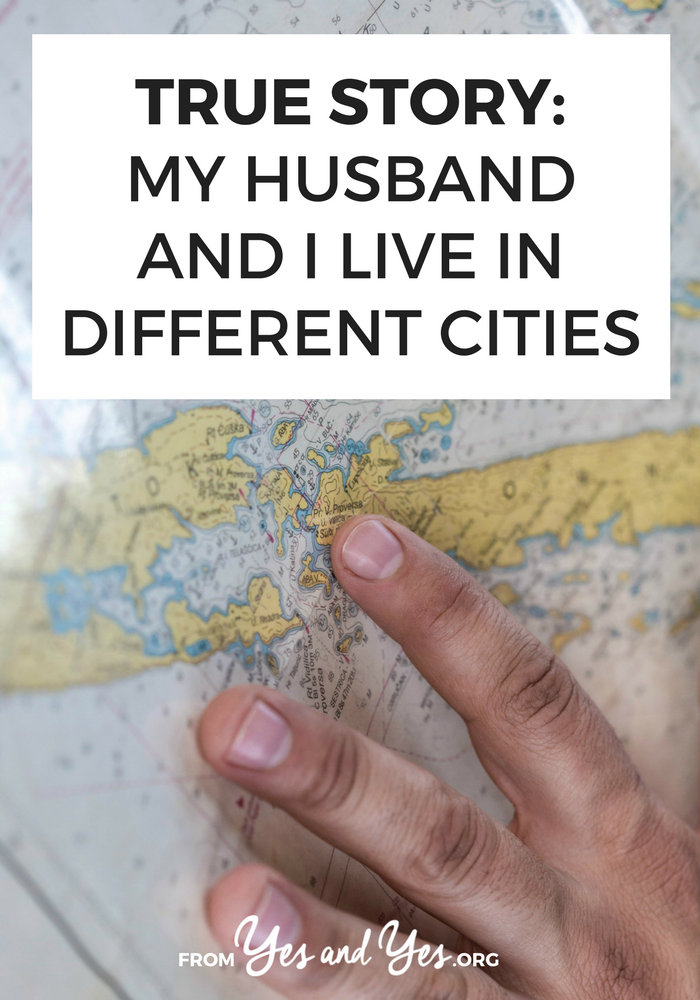 Hi! I’m Meredith. I live about 30 miles north of Seattle in the beautiful PNW.  I’m 32. I currently work at a large aerospace company here in Seattle, where I support aftermarket reliability.

When I’m not at work, I like to hike with my dog or play with fiber. I’ve been a knitter for many years, and started spinning (yes, like Sleeping Beauty) about two years ago. I’m also half-heartedly training for a marathon

Have you seen the movie UP? Do you remember the dog in that movie? Take that personality and put it in a human being with a great beard and you have my husband. I mean that in the best way possible. He’s sweet, kind, loyal. He takes better care of me than I think I deserve.

He’s pretty stable, emotionally, which is a good balance for me. He also gets distracted easily, has a ton of energy, and wants to be with me all the time. We met 11 years ago when we were both at our A school, which is the training you go to right after boot camp.

We were dating, and definitely thought there was potential, but I would have been great just dating for a while. The Navy had other plans of course, and so we got married so we could (hopefully) get orders to the same place. That plan had…less success than we were hoping. We will be celebrating our 10th anniversary this May .

You and your husband have lived in different cities for 6 of the 10 years you’ve been married. How did that happen?

We got married so that we could hopefully be stationed at the same place. He finished school before I did, and got sent to San Diego.

When I finished school, the people who decide where you go told me that they didn’t have any places in San Diego for me. My options were to either go to Washington State, which according to the Navy is the ‘same geographic region’, or I could go to a boat that was currently in Virginia, but would be moving to San Diego in year.

That was the first time apart. We saw each other 11 days that year. Once I got to San Diego, things got a little better, because at least if we were both home, we were home in the same house.

I got out of the Navy, he still had a few years left.  We both thought when we were done with the military, things would be better, but that hasn’t been the case either.

After getting out, we both went to college in Northern Arizona. We got to live together for a year and a half, and then he took a six-month internship about six hours away.

Then nine months later I had an internship. Then I graduated and had a job offer here in Seattle. It seemed foolish to turn it down since he would be done with school soon, but he took longer to graduate than we were expecting, so I was here for about 18 months by myself.

He just finished school and moved up here, but is job hunting across the country, so who knows what’s going to happen next.

How did you feel the first time you guys lived apart?

It was so hard! We hadn’t been married for very long, and I had NEVER lived by myself, and I didn’t know how to deal. I had a couple of really fabulous roommates in Norfolk, but it was really rough. It was even worse because everything was new: new city, new job, new house. No support system or anything.

Has it gotten easier? Are you “used to it” now?

It has definitely gotten easier. It’s not easy, and I don’t think it ever will be, but we definitely know how to make it work. I think it’s also easier now because we have long term goals that we are working towards.

We’ve also gotten better at communicating since we’ve been married. It took a long time for me to be able to identify how I needed him to support me, what ways he could actually do so, and then how to communicate that to him.

For example, I really struggle with spending more money than I should on takeout, because I’m tired by the end of the week, and because cooking for one person kinda sucks. I had to learn how to articulate that, and how to ask him for help, and what specific kind of help I needed, since obviously he wasn’t home to cook or know that’s what I did.

I think it also helps that we’re also both pretty independent people. I have things I like, he has things he likes, we have things we like. But we aren’t dependent on the other person being around in order for us to be happy.

I go to plays or concerts, go hiking and camping, travel, whether he’s around or not. If he’s here, awesome! If he’s not, I find myself keeping track of things I’ve done that he might enjoy the next time he’s around. But I don’t ever not do something just because he isn’t around.

We absolutely love being together, don’t get me wrong. But we aren’t the kind of people who sit at home not doing anything because our partner isn’t there.

How do you stay in touch and stay close over the distance?

This was so hard when we were still in the military. My husband was on a submarine, so no phone calls or texts. Emails only, and they only get delivered when it’s safe to send and receive, so you had to number everything and hope that it all showed up.

I made him little packages before he left on a long trip to open at various points with letters in them. He would sometimes leave things with his parents to send, or email a friend to order flowers for me or something, but it was so hard not being able to talk every day.

Now that we are done with that part, staying in touch is much easier. We talk a few times a day, FaceTime every other day or so. I really like to write letters, so I would write once a week. We aim to see each other once a month, but sometimes it’s more like 6-8 weeks.

At the moment, you guys live together, but that might change again soon. How do you prepare for that?
By focusing on the fact that we get to be together now and by talking about what our long term goals are and how we are going to achieve them.

My husband has wanted to build spaceships his entire life, but there’s only a couple of places around the country where he can get that type of work. So we talk about how he can achieve his goals, how I can pursue my career, how we can pay off our debt and own a house, how we can get ourselves in a financial position for me to own my own business. If the short term means being apart so we can accomplish the long term goals, then we consider it.

We also prepare by finding fun things to do in both locations where we are going to be living, and then making plans for doing those things.

Are there any benefits to living in a different city than your spouse?

I personally really love to be alone, so I do enjoy the feeling of living by myself for short amounts of time. It’s also fun to have your partner in a different city, because then you get two cities to explore, two cities to find the place that has the best breakfast, two sets of museums, etc.

It was great when he still lived in Arizona, because it would be warm and sunny there in the winter, and not as hot here in the summer, so if you got tired of one, you could go to the other.

What books, websites, or tools have helped you navigate this?

TouchNote lets you send a postcard that is a picture from your phone, which made it really easy to send a quick “thinking about you” note. Also, FaceTime, SnapChat, MarcoPolo are all apps we use regularly.

We depended heavily on our support system, military spouse support groups while we were still in the Navy, close friends and family after we were civilians again. We got a lot of advice from a lot of different people in our lives, and some of it was good, so we definitely tried a lot of different things.

Weirdly, a workplace advice blog I read regularly, askamanager.org, has been so helpful in learning how to communicate and advocate for myself. Additionally, I read captainawkward.com regularly, and that blog is also full of scripts and advice for dealing with other people.

I also took Sarah’s Money and Happy course and the mental exercise of thinking about what actually makes us happy and what doesn’t has been really helpful for us (Thanks Sarah!)

Having other people in your life is fabulous, but at the end of the day you are responsible for you, so figure out what you need and make it happen. Click To Tweet This not only makes you healthier, but makes all your relationships (romantic, family, friends, work, etc) better. And, you know, appreciate the time you get to spend with people while you have it.

Thanks so much for sharing your story, Meredith! Do any of you live in a different city than your spouse or partner?

P.S. A ‘Before You Commit’ checklist

Photo by Milada Vigerova on Unsplash