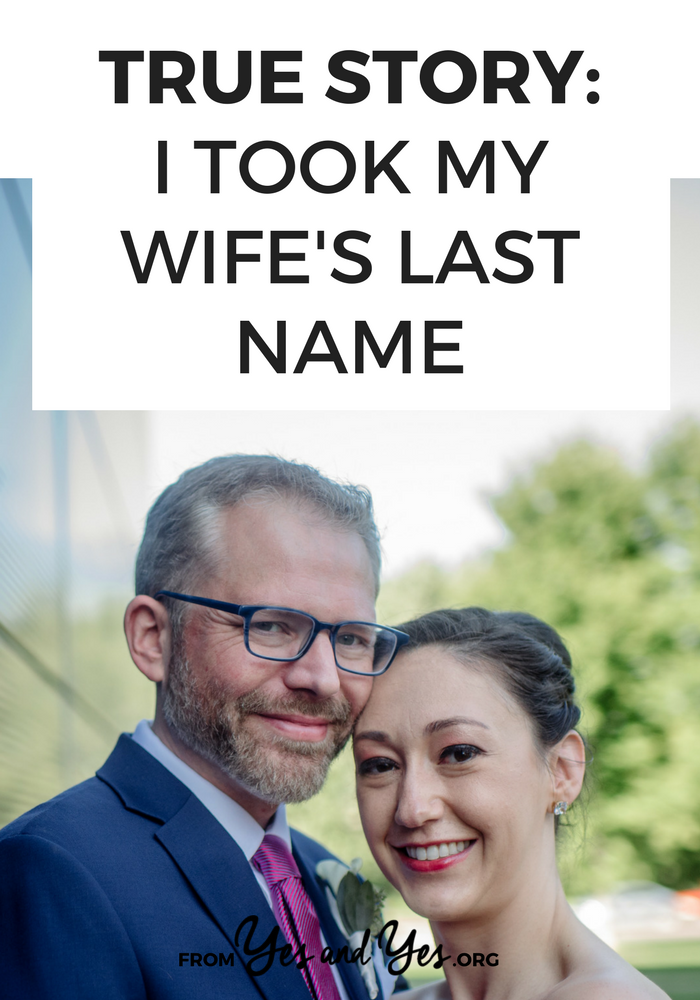 My friends Dave and Libby on their wedding day. Aren’t they painfully good-looking?!

My name is Dave Holden (née Hendricks) and I’m originally from the Northern Minnesota Iron Range and grew up in the northwest suburbs of Minneapolis.

I’ve lived in the city proper for the last five years and spend my free time running around the lakes, crafting unnecessarily elaborate goofs with friends, and injuring myself on a bike year-round. I am 38, but with the impulsiveness and risk assessment of a much younger and dumber person.

She is the most wonderful person I’d ever met. She is warm and kind and instantly makes anyone she meets feel like the most important person in the room. If you have a “How stunningly gorgeous my partner is…” series, I could fill several entries. She points out every dog to me and packs band aids and granola bars everywhere we go because I am almost always hungry and always always clumsy.

We met through a group of kickball friends in a manner that she loves to tell and that horrifies and embarrasses me to this day. She and her roommate were hosting a barbecue and I tagged along with some friends.

The communal punch was generously spiked yet delicious and our initial meeting involved me crashing through her kitchen and inadvertently rearranging every fixture in the bathroom. I escaped with my dignity nowhere to be seen.

Later, I delivered a basket of flowers with a Target gift card attached to cover the damages and an I.O.U. guaranteeing “One free haymaker to my embarrassed jaw in the unlikely event you can ever find it in public again, because I am mortified.”

Later on, we had whiskey floats on a park bench where we tried to one up each other with dating disaster stories, not knowing that our previous encounter would be one some day. Shortly thereafter, I held her hand at a Gopher game and haven’t let go since.

Growing up, how did you think about marriage, family, etc?

My parents divorced when I was nine and there was a lot of fighting and the occasional violence. It gave me less of a blueprint for marriage and more of a model of what to definitely avoid.

My mother kept her married name, so I just assumed that the maiden name was something discarded during the wedding ceremony and never got back, sort of like a snakeskin. Did I mention I was nine?

When did you guys start talking about The Last Name Situation?

It was something we had thrown about after the engagement, but didn’t really discuss seriously until the marriage license was in front of us. Anyone that has planned a wedding knows how deadlines can sneak up on you and our license was due very soon.

I threw out the idea of taking Holden as a last name and there wasn’t a downside to it that we could think of. The only hurdle left was asking her father.

What made you decide to change your last to Libby’s – rather than hyphenating, creating a totally new last name, etc?

We did briefly discuss creating a new name! The combination of Holden and Hendricks affords us two options: Hendren, which I didn’t like at all, and Holdicks, which we disagreed on strongly not because of the phallic, yet hilarious nature of it, but the number of D’s in it.

I insist that it is one D and my wife thinks it is two. Two D’s is for words like Haddock and would make the joke way too on the nose. Though one D does not make it subtle, I could still keep a straight face with Dave Holdicks on a business card.

But ultimately, we wanted to make sure the right name would be passed on to our children. The name Holden is on scholarships and non-profit boards. Hendricks doesn’t open any doors for our kids and might actually close some in the wrong circles. The wrong circles being a certain American Legion bar in northern Minnesota.

How did your families react when you told them about your decision?

My father in law was a little skeptical at first as he is rigid in his ways and steadfastly traditional. My wife and her two other sisters were not given middle names at birth; it was expected that they would take their husband’s name as their last and make Holden their middle name.

Much like I had to ask his permission to take her hand in marriage, I was expected to do the same for the name.

He was more open to it after my wonderful wife told him that, in solidarity, she would be changing her middle name from <blank> to her Grandmother’s name of Harriet.

My father is the only remaining Hendricks and I have been estranged from him for some time. He won’t be happy that the name dies with him, but the picture of him clutching pearls and retiring to the fainting couch over it only brings me joy.

Can you walk us through the process of changing your name?

The first step is to change your Social Security registration. There is exactly one place in the Twin Cities to get it done and it had three heavily armed United States Army soldiers and a TSA-style metal detector. They insisted that no matter what was in my backpack, I couldn’t bring it in, even when I said it was just Slim Jims and cold cuts for my ‘nitrate cleanse’.

Two and a half hours, forty eight numbers called, and sixteen sudokus later, I was seated in front of an interview counter with a handmade sharpie sign reading “Don’t change diaper here!” The clerk was very polite and everything was done in just a few more minutes.

The second step is driver’s license or state ID and can be done at any old DMV. I lucked out and was able to get the same clerk that we filed for a marriage license with. She was very excited for us and I filled her in on all the wedding details.

Steps three through eight hundred are every bill you receive, every banking institution, every credit card, every website, and every passport (Looking at you, Carmen Sandiego).

Zero times! The process has confused a lot of my professional contacts, though. The one monogrammed item of clothing I have doesn’t even need to change!

What surprised you about this process?

I work in IT so this shouldn’t have surprised me, but all of the good gmail addresses are already taken. Especially the one with your new, more common name

It also surprises me that more people don’t do this. If the groom’s name is Weinerbachen and the bride is Kennedy, it seems like a no-brainer.

The reaction I have received from women has been an almost universal “That’s great!” and the reaction from men is a “Well, I’ve never heard of that” (And a “Harumph” added in if they are a Baby Boomer).

That it’s such a given that women will take their husband’s name strikes me as a relic of a dowry era and has caused me to reevaluate more ingrained gender roles we ascribe to merely since it has always been that way. Like the phrase ‘maiden name’ can we change that one, too?

Thanks so much for sharing your story, Dave! Do you guys have any questions for him? Did you and your spouse do anything interesting with your last names? Kenny and I both kept our original last names because a) we’re lazy b) Von Bargen is an EXCELLENT last name.

P.S. A ‘before you commit’ checklist