The 1 Thing Nobody Tells You About Keeping Resolutions, Setting Goals & Changing Habits 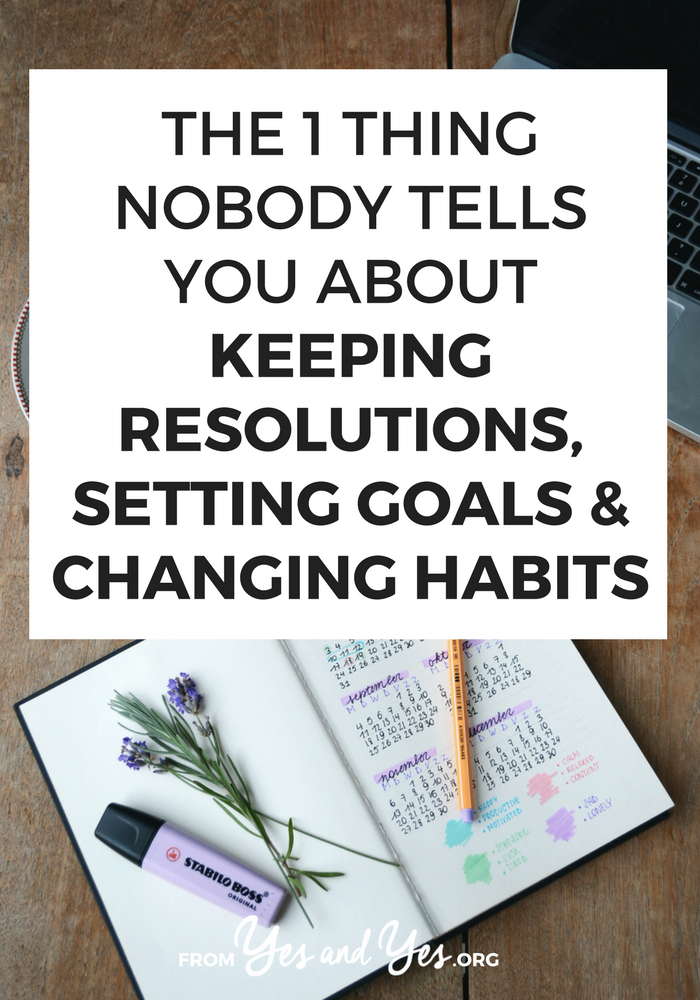 My friend and I are chatting over Skype, drinking coffee together in different time zones. We’re talking about the coming year and all our wishes, dreams, and the changes we want to make. I’m twisting my needs-to-be-washed hair around my finger while she lists out evvvvvvvverything she wants to change starting on January 1st.

“Sarah, I’m going to totally reboot my life,” she says, leaning closer to the camera. “Number 1: no more white carbs. Number 2: no more social media after 8 pm. Number 3: half an hour of yoga every morning. Number 4: lunch with a friend every week.”

She keeps going, counting everything off on her fingers and then laughs. “And it all begins on January 1st! I’m like one of those women’s magazine covers: New Year, New You!”

Reader, I’m going to tell you exactly what I told her.

You probably don’t want to hear it and I’m not sure you’ll read this elsewhere but I’m saying it anyway:  OMG ONLY TAKE ON ONE THING AT A TIME.

When we take on more than one goal/resolution/habit change at a time, we're exponentially more likely to fail. Click To Tweet

Why you should only take on one resolution, goal, or habit at a time

The fancy psychological term for this is “ego depletion” but even if I didn’t reference studies and doctors, I know you’ve witnessed this in  your own life.

You eat virtuous salads all day and then mow an entire tube of cookie dough at 8 pm. You resist the siren song of social media all day, only to fall down an Instagram hole after dinner. You make it through coffee break, lunch break, and even happy hour without a cigarette … and then you find yourself standing outside at 10 pm, huffing on a Marlboro.

When we take on seven different goals at the same time, we’re simply asking too much of ourselves. We’re asking our brains and bodies to exert more self-control than we have available.

There is no human alive who has enough self-control to simultaneously pursue the goals of starting the day with a run, skipping coffee, drinking a smoothie, not checking Facebook, not gossiping with a colleague, making a healthy dinner from scratch, not watching tv, and then laying out their outfit for the next day.

There are certainly people who do those things every day BUT THEY WORKED UP TO THAT ISH.

They developed the habit of running every day and once that habit was solidified, then they added the smoothie. After they’d been drinking smoothies every day for, like, three months then they weaned themselves off coffee.

I know slow and gradual change is less sexy than immediate transformation, but it’s a million times more likely to stick.

Again, there’s a psychological term for this (“decision fatigue”). Again, I’m sure you’ve yelled “I don’t know, you decide!” at someone when it comes to dinner plans.

When we’re forced to make lots of decisions, the quality of our decisions degrades dramatically.

If you’re asking yourself to decide

Welp, you’re probably going to run out of decision juice pretty early on.

If I’ve tried and failed to give up pizza rolls on 17 different occasions, it makes sense that I’d believe I’m incapable of giving up pizza rolls.

If I’ve attempted to take up running (and then given it up) every year for five years, OBVIOUSLY I’ll think I’m bad at keeping resolutions.

The more frequently we engage in a behavior, the more it becomes part of our identity and our personal narrative. The more more often we think something or do something, the more likely we are to think it or do it again in the future.

Every time I think “I can’t stick to resolutions” I’m making it less likely that I’ll ever stick to a resolution in the future.

How people screw this up

We think we’re the exception to the rule

“Sure, Sarah. I understand that other people shouldn’t take on 23 new resolutions at a time but I’m not like other people!! My neurology is literally different from other humans and all the research those psychologists did applies to everyone other than me!!!”

Type A overachiever: I see you and I’m calling you out. I know you’re reading this, nodding, and still planning on taking on a million resolutions. I know you think that you can change 13 habits at a time.

You can’t. You shouldn’t. Please don’t.

You’re probably not the exception to the rule (and that is totally okay).

We try to mash 11 different goals under one heading

So I’ve convinced you that you should only take on one goal at a time. And now you’re trying to get around it by making your goal something like “Get healthy” or “Get serious about my career.”

No! Caught you! Stahp.

“Get serious about my career” is really, like, seven different goals

So look at that goal or habit change you’re working towards and make it about 90% smaller.

I want to hear from you! Where do you struggle when it comes to resolutions, goals, and habit change? Tell us in the comments and we might be able to help!

P.S. An insanely easy way to stick to your resolutions + Make it easier to be awesome

Photo by Estée Janssens on Unsplash