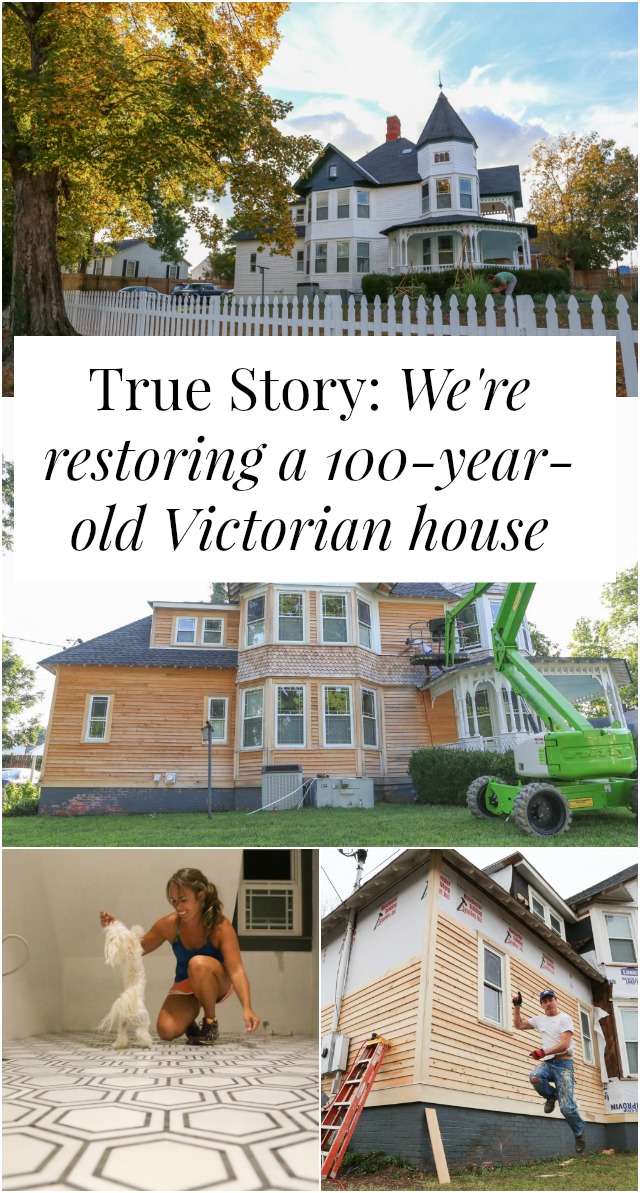 Have you ever watched HGTV and become convinced that you should probably restore a Victorian house? TRICK QUESTION OF COURSE YOU HAVE.

If you’re a human with a pulse, you’ve probably been lured in by the siren song of intricate woodwork and impressive before/afters. But what’s it really like to rent an industrial vacuum so you can clean up “a century’s worth of dirt, insulation, pecans and animal skulls”? My friend Kristin shares her story!

I’m Kristin Luna, an almost-34-year-old journalist from a small town in Tennessee. I’ve worked in journalism, primarily magazines, since my mid-teens, though like any entrepreneur in the digital age I have 1001 “other” titles, in addition to side hustles.

I’ve worked as a travel and lifestyles blogger, as a red carpet reporter, as an influencer contracted for multimedia projects by tourism boards and travel brands, as a guidebook author, as a copywriter, as a project manager, as a digital marketer—you name it, I’ve probably done it. I’ve even written the questions for four editions of Trivial Pursuit in recent years!

Prior to moving into your Victorian, what sorts of places had you lived in?

Our three shared rental homes in California were all very different, too: a tiny house in South San Francisco, a ranch-style home in San Mateo and an old walk-up apartment in a 1906 building in Pacific Heights.

Though we had very different upbringings—I predominantly grew up in a large new build (1990) in the rural South, while he grew up in a tiny older house (1950) in the city—we’ve both always been drawn to older homes with character.

Were you guys specifically looking for a house to renovate when you moved back to Nashville? Or did this just sort of fall into your lap?

A little of both! The stars and our budget and timing all aligned for this to become a reality. Owning a Victorian was a pipe dream for us in our past lives in California. We even went house-hunting our last year living there and could not even find the cheapest of fixer-uppers for under $1 million (which was about $700,000 more than the bank would have given us!).

Part of our motivation for moving to Tennessee was the attractive cost of living, which was much lower than anywhere in California, and the idea of more space. We were tired of hemming and hawing in annoyance every time our neighbor threw a party, talked on the phone or even coughed in the apartment below us—we needed a standalone house.

We honestly had nothing particular in mind when house-hunting, nor did we have any idea we’d find a Victorian out here in such good condition—we nabbed her for less than a fifth of the price of anything we saw in San Francisco! Our only requirements were that the home had character, and if it happened to be a fixer-upper, that was an added draw.

What was your first impression of the house when you toured it with your real estate agent?

I walked in and knew: “This is it.” I couldn’t believe houses like this existed in Tennessee and that no one was just itching to snatch it up. And not many of them do anymore; sadly, the majority have been torn down.

Scott wasn’t sold immediately—he’s always the skeptic of the two of us—but being a professional contractor, he knew all the things to look for. Once he realized what good bones the home had, and that the plumbing and electrical wouldn’t have to be updated, he also was on board.

Tell us all about the house!

The home was built in 1899 in the classic Queen Anne style. It’s 2600 square feet split up between two stories with a cupola, a wraparound porch, a Juliet balcony, a quarter unfinished basement and a decent sized attic that could add another 700 or 800 square feet or so should we ever decide to finish it (which we will … one day).

There were four bedrooms, one of which we converted to an office, two small bathrooms, a connected living and dining room, a substantial kitchen that we’re itching to gut, a Florida room and a small mudroom.

Technically, the house was move-in ready condition, but aesthetically? The inside looked like a box of Fruit Loops had thrown up in it. Observe: 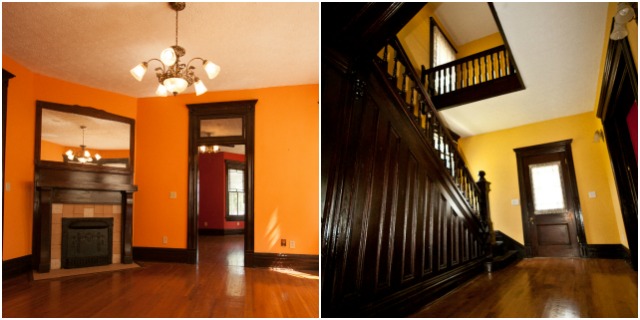 We spent the better part of three months making a huge mess—scraping the popcorn off the ceilings, sanding, patching, spraying the ceilings, then painting the walls, installing a Nest thermostat system—before finally moving in.

To date, what have you done on the house?

The big stuff we’ve done has been to replace all the siding, the roof and the 66 windows to make the home more energy-efficien. We’ve also rented an industrial vacuum to remove a century’s worth of dirt, insulation, pecans and animal skulls (sad but true).

The house had an eight-foot fence that didn’t even span two full sides of the square one-acre lot, and we fully enclosed the yard. We extended it to the street, then building a picket fence on the other two sides. We’ve done a good amount of landscaping and planting and are trying to grow a substantial edible garden. Most recently, we painted the entire exterior—by both hand and by sprayer—and just have a few days of touch-up work left to do.

If you had to assign a percentage, how ‘done’ is the house?

At this point, maybe halfway (maybe). Anytime anyone asks when our house is going to be done, I tell them: “never.” There will always be more to do! We spent so much time (and money!) on the exterior that we’ve really not paid much attention to the interior until now. We really only have one room that’s (mostly) done and it still needs curtains.

An interior designer friend told me to pick one project at a time and see it to completion before starting another. The problem with this house, though, is that many things have to happen in conjunction with one another.

For example, we cook a lot, and the kitchen, while large, is not at all conducive to massive amounts of cooking. But before we renovate the kitchen, we need to move the wall between the bathroom and mudroom, seal up a door and gut the bathroom. So there are many steps that have to be taken in order for other projects to even be viable. 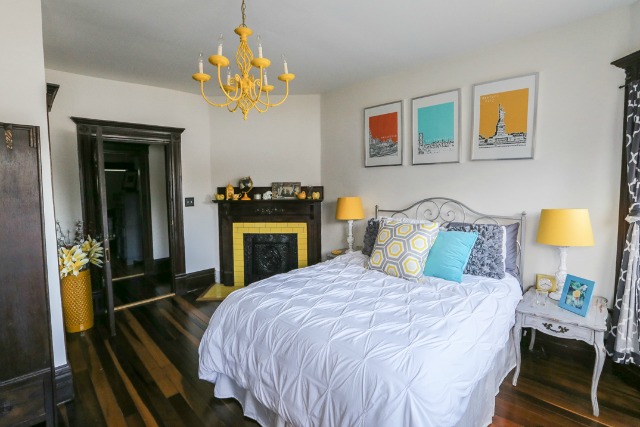 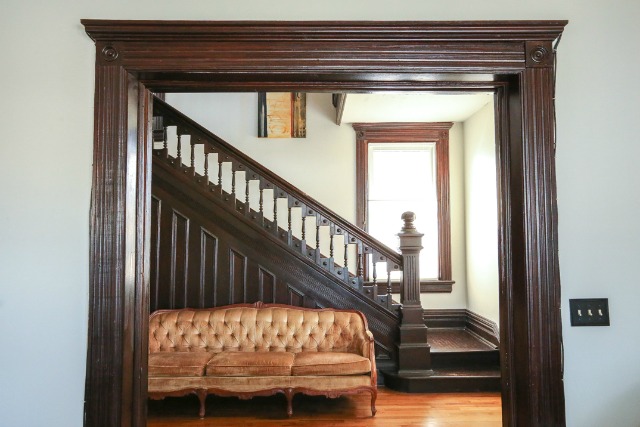 People always joke that remodeling a home tries the strength of a marriage. Have you found that to be true? How have you guys managed to do all this and maintain a good attitude?

Ha! It is true. Luckily, our arguments have been few and far between, though. I recognize this is Scott’s skillset and not mine and so I don’t mind (too much) letting him boss me around.

But there are plenty of days I’d love nothing more than to be on my couch watching a Netflix marathon. He has to coerce me out to do some home task or another, and I will admit I can be difficult then 😉

We both work out of our home, so have even more incentive to make it a really awesome space. But that’s a double-edged sword because it means we’re also always living and working in somewhat of a construction zone. It’s hard not to want to put client projects aside during the workweek to make some progress on the house.

I think a lot of us fantasize about buying an old house and remodeling it. What tools/books/websites resources have you found particularly helpful?

Honestly, we don’t use many. If there’s something Scott doesn’t know how to do—and that’s very rare, I tell you—he’ll search or YouTube it. For the most part, though, we bank on his 20 years of construction experience and the fact that his dad, a hobbyist woodworker, taught him all these skills as a teen. We make so many trips to Home Depot and Lowe’s, we should have bought stock in both companies.

Two of my long-time favorite resources have been A Beautiful Mess and Young House Love. The brains behind both sites are just so creative, and they’re all DIY, all the time. I know that if they can tackle a project, then we probably could do it, too (though sometimes I do wish I could get them to do it for us!).

That if you want to get something done, you’re probably just going to have to do it yourselves. On the rare case, we did hire an outside professional to do the work, they were never reliable. Often it’s just been easier to carve out the time and learn a new skill, if it’s not something Scott already knows how to do.

If, five years ago, you’d have told me terms like “hacksaw,” “hazmat suit,” “ratcheting screwdriver” were going to be part of my regular lexicon, I would have thought you were on drugs. But you’re never too old to learn, and it’s been nice developing a new set of skills that actually have practical use!

Thanks so much for sharing your story, Kristin! Do you guys have any questions for her? Have you ever been tempted to buy an old house to restore?