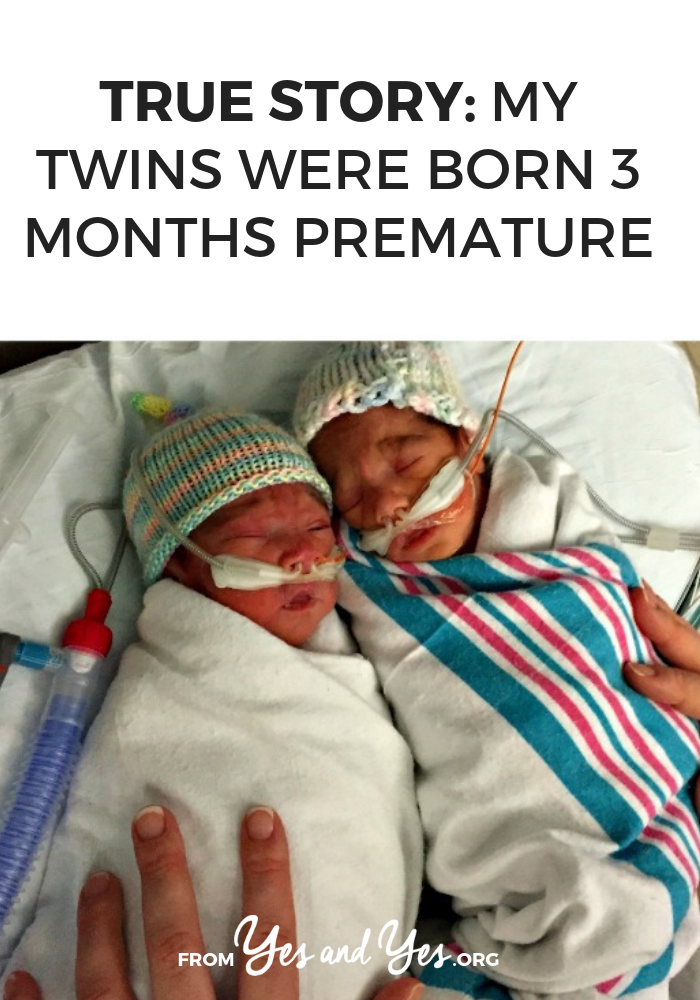 Having twins is a pretty big deal. Having twins who are born three months premature is … what adjective do you even use to describe that? Today, Heather shares the story of her family and how her daughters arrived earlier than planned.

I’m Heather. I’m 30 years old and am originally from the suburbs of Chicago, IL. My husband and I now live in the Finger Lakes region of NY with our rescued lab-mix Emma and our twin girls. Before the girls were born, I worked as a special education teacher, but now I get to be home with them.

What do I do for fun? Well, when the girls aren’t keeping us too busy, we love to hike, bike, CrossFit, and I love doing crafts and DIY projects around the house.

For those of us who don’t know, what does it mean when a baby is a ‘preemie’?

Preemies are babies that are born too soon, before they are considered full-term, which is usually around the 38th week of pregnancy. Our girls were born when I was 28 weeks pregnant, 3 months early.

A fetus’ organs develop at different times during the pregnancy, so preemies are born before they’re fully developed and are at risk of complications from underdeveloped organs, like their lungs and eyes.

I loved being pregnant and felt pretty good. My “morning” sickness was typically “late afternoon/evening” sickness, which got me out of cooking dinner, as the smell would make me nauseous!

I was able to stay active (doing modified CrossFit, walking, and hiking) throughout the first half of my pregnancy, too. Even after I was admitted to the hospital, everything stayed relatively uneventful for those first few weeks.

When did you realize that you probably wouldn’t be carrying your babies to full term?

As soon as we found out we were expecting twins, I started preparing myself, since it’s not uncommon for doctors to deliver twins early. It wasn’t until my 20 week anatomy ultrasound that we realized just how early. They saw that my cervix was thinning and I was referred to a perinatologist (90 minutes away, in a larger city) for closer monitoring.

During a subsequent follow-up appointment, they found that my cervix was starting to dilate. I was just shy of 23 weeks, the earliest gestational age the girls were considered viable. I was admitted to the hospital immediately, where we were given a lot of information about their odds of survival and potential complications.

We were told we needed to make serious decisions about what interventions we would want to be used if they were delivered within the next few days. 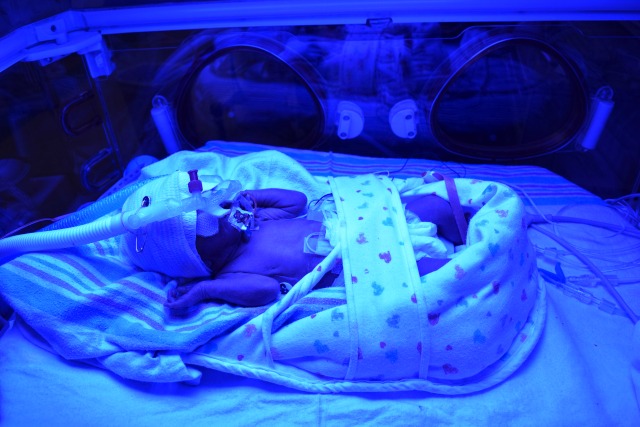 How did your medical team make the decision to deliver your daughters at 28 weeks?

My body and the girls made that decision for us. I had been on bedrest in the hospital for 5 uneventful weeks, much to our (and our doctors’) surprise. We had even discussed the possibility of going home when I reached 28 weeks. The night before I was supposed to head home, the contractions started.

After being given steroids (to help the girls’ lung development) and a couple medications to stop my labor, they managed to stop the contractions.

They started again the next evening (there was no more going home for me after those initial contractions) and the girls were delivered via c-section (since Baby “A” was breech) early the following morning.

How long were your girls in the NICU?

Our girls were in the hospital for 80 days, coming home just under a week before their due date. Much of their first month consisted of stabilizing them and starting to give them breastmilk via nasogastric tube feedings, since they were not ready for nursing or bottles at that time.

They were both born with Patent Ductus Arteriosus (PDA), which is an abnormal opening that is supposed to close during fetal development.

When it stays open, it can cause problems for preemies, such as putting too much strain on their hearts. Madeleine’s PDA caused her enough digestive and breathing problems that they operated to close it the day before she turned one month old, when she only weighed 3.5 pounds.

Hannah’s PDA is still open, so we continue to follow up with the pediatric cardiologists. During their second month, it was a lot of stop and go progress slowly increasing their feedings, trying to begin to wean them off oxygen and medications, and help them gain weight.

We transferred to a hospital closer to home for the final few weeks of “feeding and growing,” before they finally were able to come home.

Those five weeks of bedrest and subsequent 3 months of hospitalization for the girls were the most stressful and longest time in our lives. The hospital I was admitted to was more than 90 minutes from our home, because I needed to be in a facility that was equipped to take care of micropreemies (a Level III Neonatal Intensive Care Unit).

From mid-February until the end of May, my husband was working, preparing the nursery (which we hadn’t finished), and commuting on the weekends to see the girls and me (with the occasional mid-week trip if something significant happened).

After the girls were born, I lived in the Ronald McDonald House near the hospital, which was a huge blessing.

I recovered from my c-section by walking from the parking garage to the NICU and spending my days pumping and doing as much care for the girls as I was allowed. I would try to get to the NICU by 9 am, usually left for a late lunch and the occasional nap in the early afternoon, then would go back until about 7/7:30 pm.

Looking back, I don’t know how either of us made it through as well as we did. We just dug deep and kept our focus on doing everything we could to help the girls grow and be healthy.

Obviously, an experience like this is incredibly taxing – emotionally, financially, physically. How did you take care of yourself during this?

I can honestly say I didn’t take care of myself during their hospitalization. Of course, I continued eating as well as I could, tried to nap, and would take some walks as I began to heal from the surgery, but I spent as much time as I could at their bedside.

Being with them and pumping made me feel like I was doing something to help them. This helped me to feel some sense of control during a time when I really was not.

My husband went back to work when the girls were still in the hospital, which relieved a huge financial burden. He checked in with us daily and his weekend visits gave me the emotional support that I needed to get through the week without him. 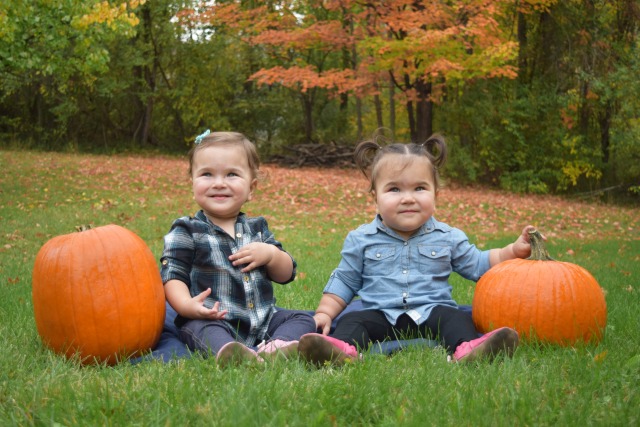 How are the girls doing now?

They’re amazing! The girls have overcome so much, we’re so proud of them. After struggling to gain weight when they first came home, they became awesome at nursing and great eaters, who love meat and avocado. They’re little chunkers!

They have significant developmental delays, but we are blessed to have amazing Early Intervention providers.

Both girls struggled with severe gastroesophageal reflux their first year, but our speech/feeding therapist comes biweekly and has helped us to overcome a lot of their sensitivities and we’re now starting to focus on their speech delays.

The girls also get physical therapy twice a week. They didn’t crawl until they were 16 months old, and are just starting to walk, which they are very excited about!

What books, tools, websites, resources helped you get through this?

We did a lot of googling. We found it helpful to read blog posts and success stories from other preemies born around the same gestational age as the girls, as well as medical websites that provided us with information about prematurity and complications we could possibly expect.

The real “resources” that helped us get through it were the staff at the hospital. The girls had such amazing care from their team of doctors and nurse practitioners, who walked us through every issue that arose, their nurses who took amazing care of the girls (and us!) day in and day out.

The lactation consultants who helped us figure out how to breastfeed preemies and the rest of the staff who would check in and brighten our days. We also had amazing family and friends who checked in and helped us stay positive and prayed for all of us.

What did you learn from this that any of us could apply to our daily lives?

I would say that this experience just really reminded us that, despite how much you plan, things will not always end up like you think they will. We never expected that our uneventful pregnancy would end with premature twins who continue to face delays and struggles.

We learned firsthand, that despite whatever struggles we may be going through, if we lean on each other and keep the faith, we can make it through. We may not have ended up where we expected, but we are blessed to have our two girls at home with us, just beginning the next part of this journey.

Thanks so much for sharing your story, Heather! Do you guys have any questions for her? Have any of you delivered your babies well before their due date?

P.S. True Story: We adopted a baby + True Story: I chose to have a baby on my own (with the help of a sperm donor and a team of doctors)