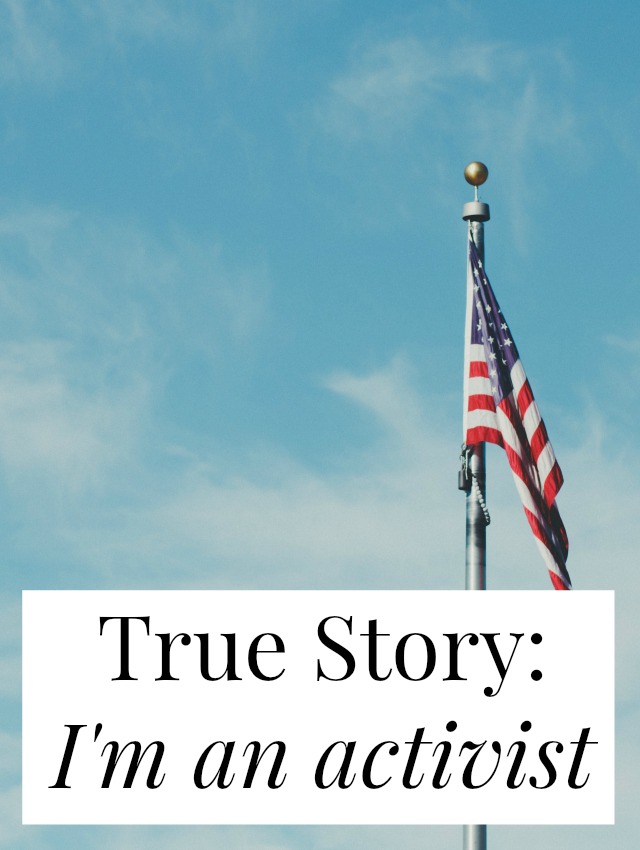 What does it mean to be an activist? When are you ‘allowed’ to call yourself that? When you’ve marched in X number of protests? Donated X amount of time and money to X causes? Today my friend Rachel shares her story and – what a relief! – being an activist and taking part in our communities and political process is a lot easier and less intimidating than you’d think!

Hi, I’m Rachel! I’m 34 years old and I live in New York City, but I’m originally from Sydney, Australia. I work as an author and speaker on gender and sexuality issues (I published a book called The Sex Myth in 2015), and in my spare time I like to host dinner parties, read books, see shows, and work on political issues I care about.

Like a lot of people in my age group, I was really drawn to environmental issues as a kid – I started an “environment club” with other kids in my neighborhood, dreamed of working on Greenpeace’s Rainbow Warrior or intercepting whaling boats, and I remember lobbying my mother in the polling booth to vote for Australia’s Green party as a 9-year-old.

When I grew up and went to university, I joined the Activist Left on my campus, became engaged with feminism and campaigns for affordable education, and protested against the Iraq War. This year, I volunteered on Hillary Clinton’s campaign for US president, making phone calls, knocking on doors to register people to vote, and leading buses of volunteers in the swing state of Pennsylvania.

What are the causes in particular that you’re working on right now? And how are you taking action?

My day job itself is somewhat is activism-based: I earn my living going to college campuses and talking to people about sexuality, with the aim of helping people think critically about the assumptions they hold about sex and expanding our ideas of what’s “normal.”

I’m also developing programs and tools that will help people have these same conversations without me being in the room, including a devised theatre project that will be launching nationally from February.

Outside my day job, since the US election I’ve spent a lot of time meeting different people and organizations, in an attempt to figure out how I can be most useful when it comes to the other issues I care about: fighting racism, fielding strong progressive candidates and helping them win office, and improving dialogue between people of different races, political persuasions, and geographic locations.

Two organizations I’ve been really impressed by are the New Kings Democrats and Showing Up For Racial Justice. NKD is a local Brooklyn organization focused on making the Democratic Party more progressive and more effective from the ground up. SURJ is a national organization of mostly white allies for racial justice. Its NYC branch has working groups on everything from incarceration and police brutality, to community education, to building a community of allies and calling people in.

Is there a ‘wrong’ way to take part in activism?

The worst thing you can do is not take any action at all because you’re too afraid of doing the wrong thing.

Beyond that, there are a few good general rules of thumb. Listen to other people. Do your research and find out what others are doing on an issue you care about before diving in yourself (we are most powerful when we collaborate).

Don’t make it all about you. Be humble, and try to use criticism as an opportunity to learn rather than a personal attack.

Be kind, and don’t use the critiques you have of other people’s activist work as an opportunity to make yourself feel superior (we are all flawed, and we are all always learning).

During the Black Lives Matter protests, some people took issue with protesters blocking highways, etc. Why is this kind of activism important?

I think of social change as a kind of ecosystem: lots of different types of action are necessary to reach any desired outcome, and we can never be 100% sure of which actions will be the most effective.

In the case of public protests and direct action, what tends to make these effective is the very inconvenience they cause – they force people to pay attention to an issue through disrupting the way we go about our everyday lives. There is a lot more to Black Lives Matter than blocking highways, though! 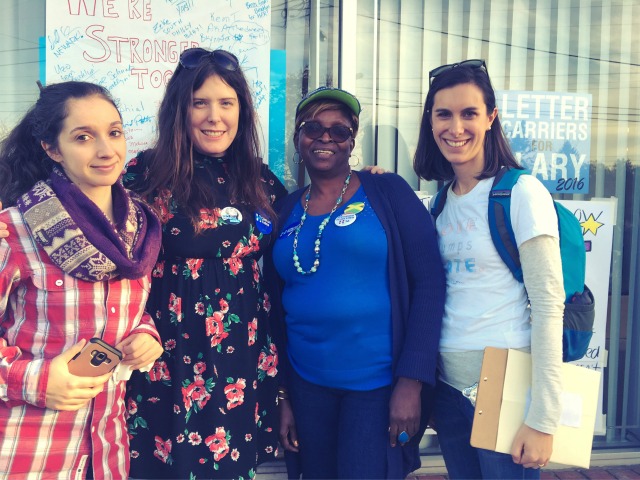 How have the people in your life reacted to your political involvement and activism?

Well! One of my most heartwarming moments this year was when my Dad emailed me after the first time I traveled to Pennsylvania to door knock for Hillary, saying that he was proud of me, and he was glad my parents had raised my sister and I to take politics seriously.

A lot of people feel that their voice, their one vote, doesn’t matter. Do you ever struggle with compassion fatigue?

Maybe not “compassion fatigue,” but definitely fatigue! There’s so much going on in the world at any given moment that it’s almost impossible to stay on top of it all, let alone for any one person to fix it all. It’s easy to feel ignorant and impotent in the face of it.

Similarly, after the US election, there was an explosion of newsletters, google docs, and Facebook updates trying to capture people’s energy and enthusiasm, usually by suggesting we make calls to our representatives on X or Y issue. I quickly found these requests became overwhelming – and while they matter (and I’ve made a lot of calls), they didn’t really speak to the long term cultural change that is most interesting to me.

I think it’s helpful here to remember that you don’t have to take on every action that is suggested to you in order to be effective. You don’t need to do everything. You just need to do something. Click To Tweet

Do you ever want to throw in the towel because nothing seems to be changing?

I know this is something a lot of my friends have felt, especially (again) in the wake of last year’s US presidential election, but I honestly haven’t felt that way at all. I remember the morning after the election, walking through my neighborhood and thinking, “Well, I did everything I could,” and immediately realizing that wasn’t true. That is to say, my responsibility to the country I live in didn’t end at the election. It continued far beyond that.

It’s this sense of responsibility that keeps me going, as well as a realization that social change is often incremental. Take the workshops I run at college campuses as part of my job. They haven’t changed our sexual culture en masse, but they have transformed the outlook of some of the people who’ve attended them. That still matters, and it makes my efforts worthwhile to me.

So many of us have limited free time and limited discretionary income. What are some ways we can affect change with that in mind?

I think it goes back to what I said before: You don’t need to do everything; you just need to do something. Pick an issue you care about. Do some research and find out which organizations are working on it, whether on a global, national, or local level.

Look for ways that you can contribute: maybe it’s giving money, maybe it’s participating in their actions, maybe it’s going to a meeting, maybe it’s making phone calls or knocking on your neighbors’ doors, maybe it’s joining a working group and contributing a skill you have.

Find an action that enlivens you + contributes to the social change you most want to see. Click To Tweet

Activism is so much broader than a lot of people think it is. It’s not just about going to protests or starting an online petition – although those things are great. It’s about identifying an area in which you would like to see the world be better, and taking action to make that happen.

Thank you so much, Rachel! This was so, SO helpful. Do you guys have any questions for her?

A few helpful tools: The Countable app that keeps you updated on proposed bills and helps you contact your reps + The Indivisible Guide: a practical guide to resisting the Trump agenda.