True Story: I Can’t Stop Pulling Out My Hair

This is one of many True Story interviews in which we talk to people who have experienced interesting/challenging/amazing things. This is the story of Jaye and her struggles with trichotillomania. 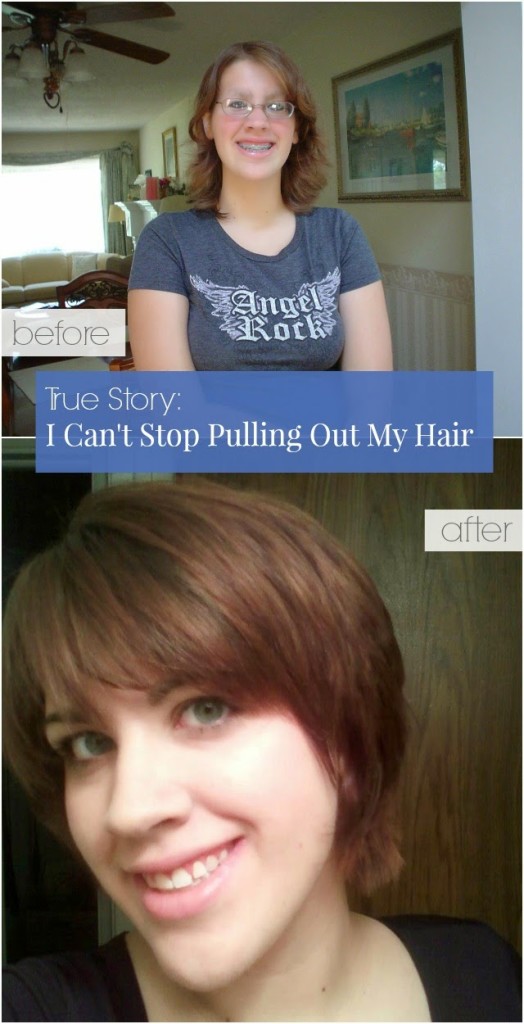 Tell us a bit about yourself!
Hello! My name is Jessica Lindsay, but I go by Jaye. I’m from Baltimore, MD, but I grew up in Greenbrier County, WV. I’m 22 years old (almost 23!). During the day, I’m a medical biller, but I have a small photography business on the side. I love exploring abandoned buildings and taking pictures of that. My other hobbies include cooking, reading, video gaming, and writing.
For those of us who don’t know, what’s trichotillomania?
Trichotillomania essentially a hair-pulling disorder. You’ll hear it referred to as an impulse control problem, a branch-off of dermotillomania (a skin-picking disorder), and even obsessive-compulsive disorder.
When did you first start pulling out your hair?
I was first diagnosed at age eleven, but I think I’ve always pulled. The thing with a disease like this is that unless it has noticeable effects, this can go untreated for many years. I grew up hearing “Get your hands out of your hair” like it was a catchphrase, and this was before I was diagnosed. When I first heard the word “trichotillomania”, I had pulled out so much that there was a rather large bald spot at the crown of my head.
What triggers your trichotillomania?
Stress is the number one trigger for most people, and it’s why I originally started pulling. When this first began, I was at a new school with no friends for the second time, and my mother and I were arguing almost daily. Later, and especially now, it’s more of a concentration technique. I go into trances when I read or am on a computer where I won’t even realize that I’m pulling. It’s so habitual for me now.
Do the people in your life know about this?
My mother was the first to know, and she used it like I was attacking her. Since I left her home, it hasn’t been brought back up. My father’s approach is that if we didn’t talk about it, nothing was wrong. That kills me, because out of everyone, I wanted to talk to him the most about it because I’m positive he has dermotillomania, so he should understand what this was like.Maybe that’s why he didn’t talk about it, because he didn’t like talking to people about his problems and he thought I wanted the same. His second wife, she thought I was shaving my eyebrows and eyelashes. I don’t know if she ever acknowledged that this wasn’t intentional. Now, she’ll notice holes in my facial hair and sigh and go, “Oh, Jessie.”
I don’t keep this a secret. If someone asks, I’ll tell them about it, but it’s not something I go around, proclaiming that I have trich. Some of my friends know, but they also take the “This is awkward, let’s never mention this again” approach. Only one of my friends has ever brought it up on her own. Three weeks ago, out of nowhere, my friend, Lindsey, posted on my wall this video about trich. I hadn’t talked to her in years, and it just really touched me that she not only remembered, but she thought of me enough to send me that.
Has it affected other areas of your life?
Well, it has definitely affected my social life. Children aren’t necessarily nice about these types of things, and that bullying has carried over heavily into my adult life and I missed out on many of those “must have” high school experiences. Also, my self-esteem is a work in progress. I’ve only rather recently learned it’s okay to have pictures taken with me in them. It’s an interesting thing, to always be conscious of your body hair.
Have you sought treatment?
I’m lucky that when this manifested itself at its worst, I was not paying for my own health insurance. I worked with several different therapists and I recently started again after an eight year break. Unfortunately, it’s never worked. Maybe it’s because I was never just going for trich, but I can honestly say that I’ve done better on my own than with therapists. I’m not saying it’s that way for everyone, but it’s that way for me.
How are you coping with it these days?
When the bald spot appeared on my head in sixth grade, I knew that could never happen again. I turned to pulling my eyebrows and eyelashes, which has followed me around since then. Some days are better than others. I actually have eyebrows, though they’re a little short and have some thin spots, and my eyelashes exist, with holes but still there. I’ve gotten very good at hiding my missing hair. The trick is to pull where no one will notice but you. Most people wouldn’t even know I have it if they met me on the street, which is the plan, of course.
What advice would you give to others who are struggling with it?
There are a few lessons I learned that have helped me tremendously. For one, keep your hands busy. If you recognize a situation where you normally pull, such as reading, get a squeeze ball, get some fidget toy, get a hair band and just play with it.Another tip is to keep your hands away from your face. Don’t play with earrings or necklaces. It’s a short leap from there to your hairline or wherever you pull. The other advice is what I mentioned before: if you absolutely must pull, pull in a place where it won’t be missed. This rule has helped me above all else

Thanks for sharing your story, Jaye. Have any of you struggled with something similar? Do you have any questions for Jaye?

P.S. Other health-related interviews – I received a donated kidney + I have synesthesia