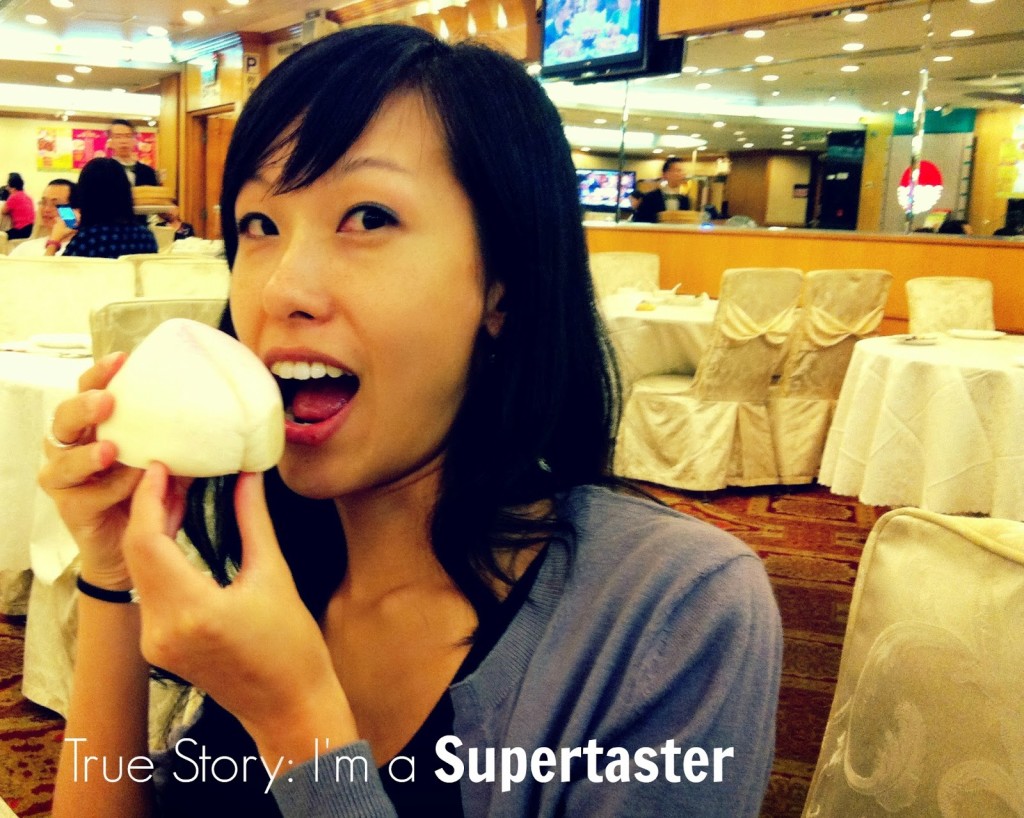 Mel with a steamed bun

My name is Melissa, and I was born in Hong Kong before moving to San Francisco at the age of 7. I lived in San Francisco most of my life and in Seattle and New York for a bit before coming full circle by moving back to Hong Kong 3 years ago. I work in planning and strategy for a Fortune 500 company and I am a food blogger and photographer in my spare time.
For those of us who don’t know, what is a ‘supertaster’?
A supertaster is basically a person who experiences the sense of taste with far greater intensity than the average person. The term was coined in the 1990s by Linda Bartoshuk of Yale University after she discovered that some people reported a bitter taste to a certain chemical while others did not. Besides having more taste buds, supertasters are more sensitive to bitter tastes and fattiness in food so they tend to dislike strong bitter food like coffee, broccoli, grapefruit juice,green tea, etc. It turns out that about 25% of the population are supertasters, 25% are nontasters, and the rest are in between.
When did you realize that you tasted foods differently than other people?
I guess I always knew I was a picky eater ever since I was a kid, but I have always attributed it to personality rather than genetics until I came upon an article about supertasters a few years ago. I found myself nodding in agreement as I was reading on the typical likes and dislikes of a supertaster, but I still wasn’t sure until I did the test. Apparently there is a test you can do at home, which is to apply blue food coloring to the tip of your tongue and count the number of papillae in a small area. If you count more than 30, then you are a supertaster.
How has being a supertaster affected your life?
Being a supertaster just means that I’m more averse to certain food than others. I tend to avoid eating green vegetables for example, which can cause nutritional problems in the long run. On the plus side, supertasters tend to be leaner than the general population because they tend to find fatty food distasteful. At least I got that working for me. Funny enough – no one in my family seems to be a supertaster since they pretty much eat anything.
Are there any foods that a lot of people seem to like that you don’t? Or vice versa?
Coffee. Or specifically black coffee. Being in the corporate world, I’m surrounded by people who typically go for coffee runs at least twice a day, but I can’t drink coffee without adding a lot of milk and sugar because it’s too bitter for me. If I need caffeine, I usually get a latte as the milk balances out the bitterness of the espresso. Beer is also something I mostly can’t stand. Because so many people seem to enjoy these kinds of food, I feel like I’m missing out sometimes.
Does your supertasting affect any other aspects of your life?
Because I’m so picky, my friends are usually afraid to suggest places eat with me. As a food blogger, I also tend to be pretty vocal about my likes and dislikes of food immediately so I guess I’d eventually scared them off after a couple of times. Luckily they still like me (or I like to think so), so I end up being the one choosing the restaurant most of the time – which I prefer actually.
What’s your your favorite dish?

I love sweets! I absolutely love all desserts like cakes, chocolate, ice cream, etc. My favorite dessert is Tiramisu!Thanks for sharing, Mel!  Are any of you guys supertasters? Here’s a test to find out.

P.S. Homemade junk food and How to win the next potluck you attend.