True Story: I Went Back To University At 51 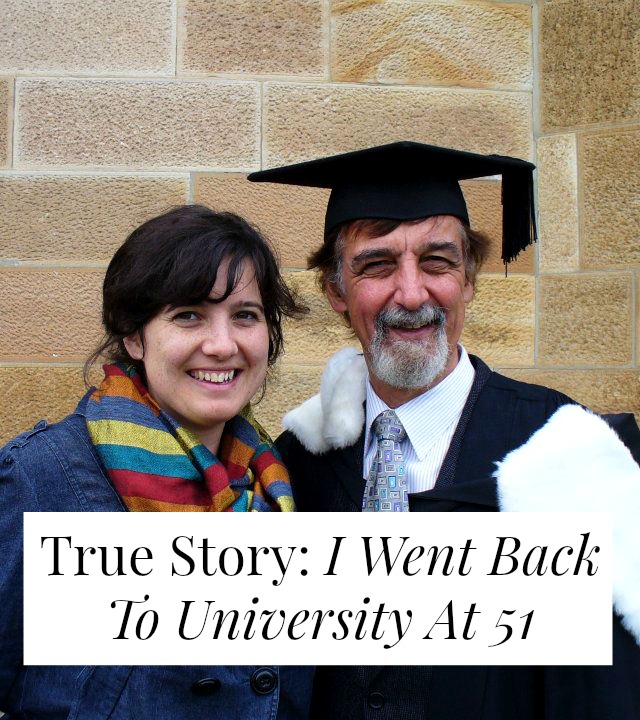 Laurie and his daughter Beth

This is the story Laurie and how he returned to college as an adult.
Tell us a bit about yourself!
I’m Laurie, 61, and I come from the suburbs of Sydney, Australia. Despite the reputation Australians have, I am not very keen on sports, except sailing, which I love. I have a 16’ trailer-sailer, not to race but just to cruise. Apart from that I like reading and doing cryptic crossword puzzles – all the really cool things!
What did you spend your 30s and 40s doing?
After I left high school I started a humanities degree at Sydney University, but dropped out after a couple of years. I then trained as an auto mechanic and in my early thirties I retrained as a mechanical engineer. So my 30s and 40s were spent living in suburbia, bringing up a family – I have two children – and working as an engineer.
What made you decide to go back to school and change careers?
At first, engineering was very challenging and I got a lot out of it, but as the years went by it became less interesting to me. I tried changing the firm I worked for a couple of times, but that didn’t really work. Also, the area of industry where I had most experience was being outsourced overseas more and more, so my opportunities were shrinking, not growing.
Eventually I decided that instead of making small sideways shifts I needed to do something completely new like finishing the humanities degree I had started thirty-odd years before. It was not really a career change, so much as reviving an old dream, while I continued to support myself by doing what I knew.
How did you juggle school/work/family?
In the first year I only did subjects which offered evening classes, but there were not many of these, so I soon had to think about taking time off work. I particularly wanted to do German, which involved three classes per week, always held during the day. So I asked my boss could I have time off during normal working hours, then work back in the evening, and he agreed. So that is how I did most of my degree.
My family were really great. My wife and children accepted my decision to go back and supported me as much as they could, but of course I often felt the pressure of conflicting expectations, especially when essays were due. I made a big calendar on a whiteboard and planned out my time for weeks ahead, so I wouldn’t get caught out, and if timing did get tight, I just gave each part of my life, including my study, the best I could.
How did the people in your life react to your decision?
I read once that when you propose making a big change in your life, people close to you will often try to dissuade you, not so much for your sake but because they don’t want to have their own lives disrupted. So when people were a bit negative at first I tried to answer their concerns but also stay committed to my overall goal. After a while people adjust to the new routine and accept the new “normal”.
My daughter, who was still at university when I went back, even came to my first lecture with me for moral support, and my wife has always been understanding about the time I need to get readings and essays done. If my family had not been supportive, I wouldn’t have made it.
How is school different this time around?
I feel much more confident now (by the way, having completed the humanities degree at Sydney, I am now in the middle of a Masters at Oxford). I don’t have all the worries about social life and getting a career that people fresh out of school do.
The first time around the Vietnam War was on and I was coping with things like being drafted. It’s more fun this time and I have more resources, like time management skills and the support of a family, to cope with the ups and downs. I often just feel very grateful that I have had the chance to go back and redo a bit of my life that didn’t work out the first time.
What is it like to attend classes with people who are 30-40 years younger than you?
It’s both challenging and fun. I find younger people are very accepting of me, and I hear lots of things about life that as a 60-something year old I would not normally hear. I try to be really sensitive about knowing when to draw back, and not fall into the trap of thinking I am “18 again”. One problem is, teachers sometimes assume you know more about their subject because you are older, which is frustrating.
What are the best parts of attending university at this age? What are the challenges?
Best Parts: Meeting new and interesting people. Reading books and engaging with ideas which you would not otherwise encounter. Travelling – I was able to go as an exchange student to Germany for six months. Graduating!!!
Challenges: Feeling out of my depth – a lot has happened since I was at high school. Getting readings done when all the ordinary things of life need to go on, such as going to work and mowing the lawn.
What advice would you give to others who are interested in going back to school or changing careers?
Feel the fear and do it anyway. But only make a change if you are genuinely interested in the new direction, don’t do it to earn more money. If you are going back to school, say to yourself “I will just commit to the first year and see how I go” – that way, you will not be overwhelmed.
Give yourself lots of positive feedback, e.g. keep a little chart showing your progress and say to yourself “I am more than a quarter of the way through now!”

Thanks so much for sharing your story, Laurie! Do you have have any questions for him?