True Story: My Father Is A Pedophile 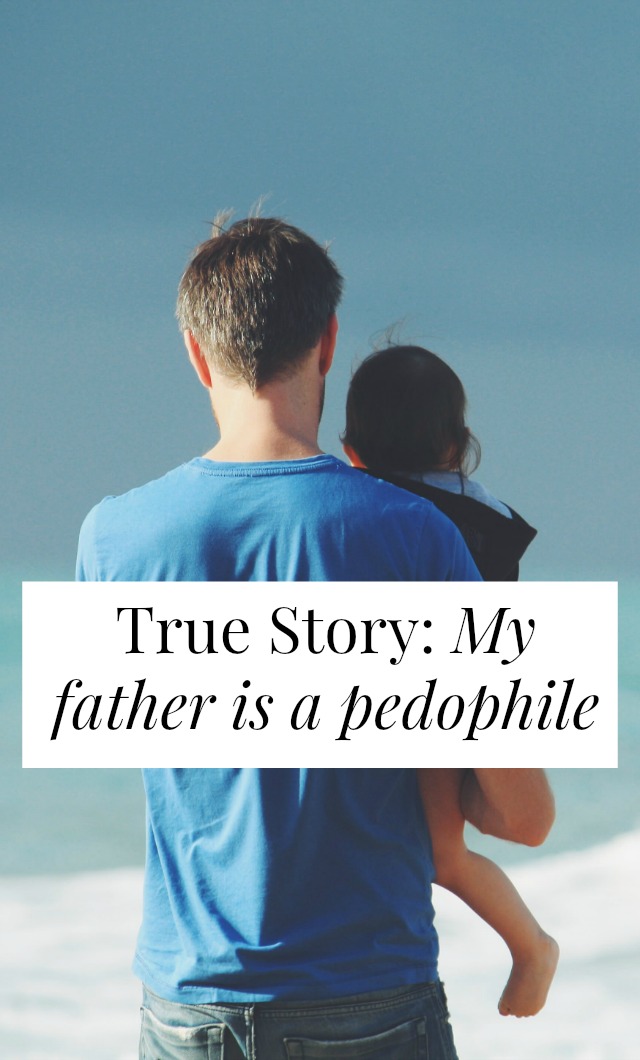 This is the story of ‘Renee,’ her father, and his pedophilia.

I’m originally a west coast Canada girl but I grew up all over the place so I don’t really have a place that I call “home,” I’m in my early 30’s and a run a location-independent online business, and for fun I do a lot of stuff but mostly I travel!

My childhood was okay – my mom was a stay-at-home mom to me and my two siblings and my dad was never around because he was an airline pilot. But my mom kind of lived in a fantasy land – June Cleaver style – and couldn’t really handle any conflict between us three kids so we’d get punished by our dad when he came home.

When I was ten my parents went through a very ugly divorce and my dad got custody of all three of us. He didn’t want custody of us, he never wanted female children to begin with, but because my mom “crossed” him by asking for a divorce, he swore he would leave her poor and childless and that’s exactly what he did.

When I was 14, my dad moved my little sister and me to Central America because white guys with money can get away with pretty much anything there. At that point we were truly on our own in raising ourselves.

When did you begin to realize that your dad was different from other dads?

I realized he was different when he ramped up his relationship with a boy in Central America. All of a sudden, his guard was down and it became so blatantly apparent that there was a very inappropriate relationship going on, and in my own home to boot.

How did your dad’s pedophilia affect his life?

It’s not even that he made excuses, he just made it look like he was a benevolent rich man who cared about the well-being of kids who didn’t have as much as our family did. He has a huge God complex and played on that to make it look like he was just being generous and charitable.

I don’t know 100% how he hid all this in Canada because I was so young, but in Central America no one was really paying attention so he had a certain degree of impunity. I do know that before I was born he was a leader in the Boy Scouts, and was dismissed under questionable circumstances.

And then in my early teens he bought a van with dark tinted windows when we already had one vehicle per driver in the family. It seemed odd, but apparently that’s common with pedophiles because they can’t bring their targets home.

How did your dad meet boys? How did he convince them to be part of his life?

When I was really little he preyed on the children of family friends but didn’t get very far. Then he targeted my cousin and actually got him to move into our house and then cut him off from his parents. Hard to believe, I know. And later when we moved to Central America he targeted poor boys and lavished their families with money and gifts.

Did anyone else in his life realize what was going on?

Nope. Well, not that I’m aware of. He’s extremely smart, handsome, and charismatic. But he’s also a classic psychopath. He lacks all ability to empathize with other humans, and once you get past the charming veneer, you realize that the only way to have any kind of relationship with him is if you allow him to control you.

There is zero dissidence allowed – which is why he has almost no friends. His carefully curated circle of adorers only see one very small part of what he really is.

Did you or your sisters ever contact the authorities?

Yes, but I can’t discuss it and to date, nothing has come of it because he’s THAT good at covering his tracks.

What is your dad’s situation now? What’s your current relationship with him?

I stopped speaking with him over a decade ago as did my siblings and he proceeded to marry a woman in the Dominican Republic, adopt two sons, and then divorce her later after he had brought the boys to Canada. From what I know, the boys escaped him after years of abuse.

Do you feel that your dad’s behavior has affected your feelings about romantic relationships or children?

I’m fortunate in that it made me be drawn to the nicest, most honest, most lovely people as romantic partners and I’ve now been with the same super mega wonderful guy for almost a decade.

After 20 years of someone treating me like a dog or a possession, I was more than ready for the opposite. And as for children, I think it’s made me
a) be realistic about how common dangerous people are (they ARE our dads, our teachers, our cousins, our neighbours) and
b) given me an astoundingly accurate danger detector.

I am less worried about my kids because I know the anatomy of a pedophile/psychopath and can help them navigate the world and recognize those danger signs.

What advice would you give to someone else whose parent is engaging in illegal, unethical behavior?

If you’re young and totally dependent on them, survive. Do what you need to do to get by and know that this too shall pass. Once you are free you can heal and if possible, get them locked up! There’s no doubt in my mind that my dad could have and would have physically harmed me badly if he thought I was onto him and a threat for exposure. First order of business is always to protect yourself.

Thanks so much for sharing your story, Renee.  Do any of you guys have questions for her?  Have any of you struggled with unbalanced, unsafe parents?