True Story: I Was Diagnosed With Ovarian Cancer at 30 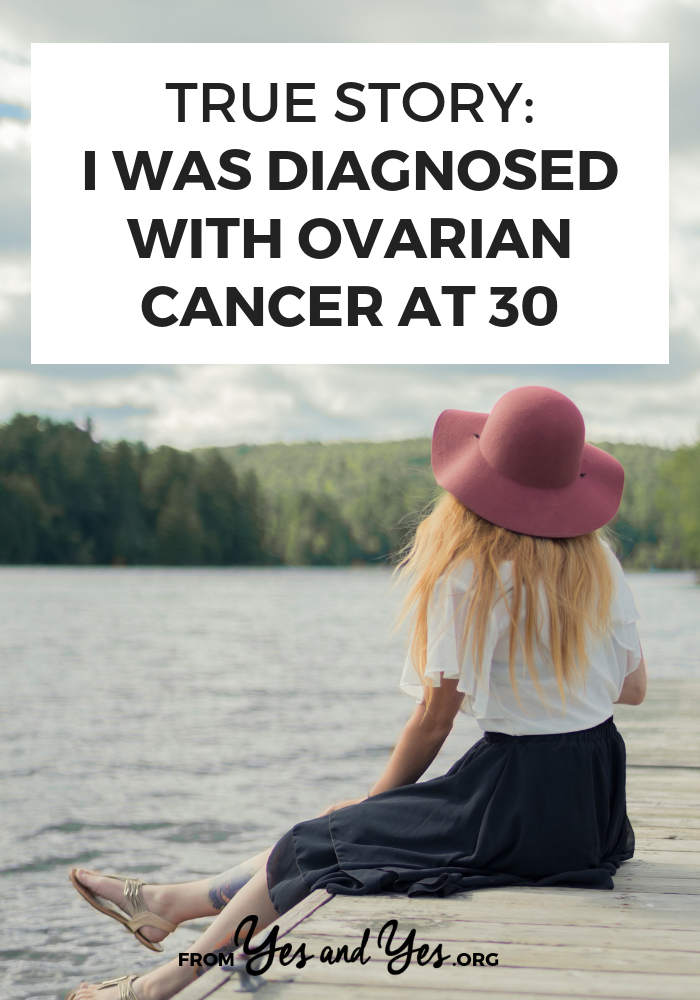 Hello. I’m Sara Rose. Currently my family and I live in South Dakota. I write professionally, teach English courses online, and am involved in about 800 creative projects. I knit, I love pink or sparkly things, I coach soccer, and I just turned 30. I always carry the largest purses you have ever seen. Because I have to carry everyone’s stuff.

For those of us who don’t know, what are the statistics surrounding ovarian cancer?

Ovarian Cancer can be a bit insidious. A lot of women can get ovarian cancer and have wishy-washy symptoms that could point to a lot of things – migraines, back pain, constipation, and one nobody complains about ‘at first’… weight loss!

There seems to be a few factors that ‘might be’ reasons or possible reasons behind Ovarian Cancer. Some links are found to certain genes in some women or a family history. Some have had some very poor luck with things like cysts, precancerous cells, and abnormal paps that all led up to it eventually.

How did you discover you had ovarian cancer?

It was very strange. Last December, my back went out, very badly. The pain was deep and intense. I’m physically active and I try stay fit, but the back pain was accompanied by terrible headaches, a total lack of appetite, and just a general feeling of exhaustion. I was hardly even examined before being diagnosed with burst discs and being put on a daily dose of morphine and bed rest.

It didn’t feel right. I wasn’t happy with the diagnosis. I called and asked to be seen by my regular doctor when she returned. I started paying attention to my symptoms because it really wasn’t back pain anymore.

I also took note of my history – I had two extremely complicated pregnancies, and after my son was born, I had to have hysterectomy because I developed a high amount of precancerous cells and the history of cancer in my family is high.

When I saw my doctor, my first shock was that I had lost 20 pounds in a month. That’s a lot, truly, because I’m not a very large person. Then she felt my back but after looking at my blood work, she started asking leading questions as to whether this perhaps wasn’t a back injury. A few days later I had an ultrasound and tried to convince myself that perhaps I had some bad ovarian cysts and the back injury.

I kept trying to rationalize things until finally I got called for tissue samples and my stomach sank. I knew what they wanted tissue samples for. A week after that, my doctor led me to her office and told me that I had ovarian cancer, it was between Stage III and Stage IV, that it was both internal and external in regard to my ovaries, and highly invasive in nature.

How did you feel when you got the diagnosis?

I remember my hands getting very cold as my doctor, who is a very frank woman, talked to me. Then she asked, “Well, I imagine you’ve already put two and two together before I gave you this diagnosis, so we need to talk treatment.

What do you want me and your team of doctors to do? (I now had a team – which was bizarre to me.) But I looked at her and said, “I want this taken out. As much as we can get. I’m not having more kids and I don’t care about early menopause. What I care about is that I have two children who won’t watch me die of something like this.” At that point I went home and let her get things in order.

Some people would cry, rightfully so. But right then, I was on a mission, I needed that cancer out of me. My motto was “Fall apart later.”

What sort of treatment did you go through?

We were insured through our employers, during the most intensive part of my treatment, they fought us tooth and nail over approval of procedures.

How did your friends and family react to your diagnosis?

Everybody reacts to cancer differently. My husband and I were very careful around our children but my daughter is going to be 7 and is very smart. She overheard me talking one night and walked in, asking why I was so sick.

We are careful but we don’t lie to our kids. However, to keep her from being too scared, I kept it “Remember after your brother was born? Mommy’s tummy got sick? It’s like that but worse and I have to get surgery again.” She was sad but a trooper. She’s grown up a lot this year.

My family has been a mixed bag. I’ve had family members not say a single thing to me, nor acknowledge that this is real, and I’ve had some be incredibly supportive.

My friends are each different. Some friends have remained so close to me during this, becoming rallying forces during times I felt like falling apart. But, some also just couldn’t handle it, cut and ran. I was a bit sad, but honestly, there are people who just get freaked over serious illness and cannot handle being around it.

Now you’re in remission. How often do you have to get follow up check ups?

I am still on oral chemotherapy – Cytoxan, and I am a lucky duck. My side effects are shockingly mild. I also am on medication to control early menopause, but any side effects I’ve had there have also been mild. I did get off of narcotic pain medication sooner than doctors usually allow.

I see an oncologist every 6 weeks or so. They do blood work and lab exams to see where my cancer cell levels are and do necessary blood work and so on. So far, I keep improving. It is likely that by late September, I can be diagnosed as being in remission. There are good days and bad days, but overall, I am lucky. I have my life.

What advice would you give to friends and family of someone with a cancer diagnosis?

It’s funny because I used to say, “Surround yourself with support!” For the most part this is true. I couldn’t have done this without friends and family members who were willing to be there during the ugliest moments. But, don’t be afraid to draw on yourself too. People have a lot more strength than they think they do. Don’t isolate yourself. Find ways to laugh and feel a little normal every day.

Make sure your insurance company is on board. I had to fight my own every step of the way to get my treatments approved and they still won’t cover my procedures. We’ve had to set up a campaign to fund my treatments and we are in the process of negotiation with them that could end up in bankruptcy or a lawsuit, which isn’t pretty. It’s made recovery that much more stressful.

Finally, find ways to feel like yourself again.Little ways, even if it’s just accomplishing putting on mascara in the morning. Recovery can be hard, and I’m blessed that my own is going so well. But listen to yourself. You know best what you truly need.

Thanks so much for sharing, Sara!  Do you guys have any questions?  Have any of you been diagnosed with cancer?

Photo by Max on Unsplash