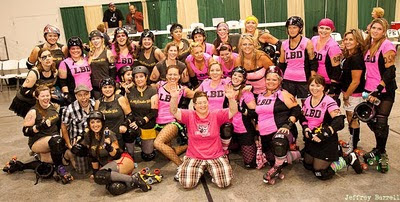 This is one of many True Story interviews in which we talk to people who have experienced interesting/amazing/challenging things. This is the story of Nikkee and her time as a roller girl.

Tell us a bit about yourself!
I’m a 23 year old Professional Writing student. I live in a small-ish college town in Indiana, although I’m from Australia (where the roller derby scene is also steadily growing!)

When did you first become interested in roller derby? What appealed to you about it?
I really don’t even remember how I first heard about it. I just remember deciding that I wanted to do it and – despite the number of people who laughed at me when I told them – running out and buying skates pretty much the next day.

I am the least athletically inclined person you’ll ever meet. I literally could not run, or throw or catch a ball – I actually used to have physiotherapy because my mum was concerned about how uncoordinated I was! Mum had started taking me to skating lessons when I was two years old, and from then until I was a teenager, I would go skate at the local rink for hours every weekend. I felt like roller skating was the one physical activity I was mildly good at, so I had better embrace it while the going was good. Eighteen months ago, I went to an open skate hosted by a derby team and thought they were the most badass girls I’d ever seen. Even though they were totally intimidating, I knew I had to be one of them.

How long did you have to train before you were accepted onto a team? What does training consist of?
A week after I landed in the US, I went to my first practice, and about three months after that I was playing in my first bout! This is pretty unheard of, mind you – normally there is a lot of training before you can even try out for a team, then after the try out there is a whole mess of skills and knowledge to perfect before you’ll be put on the roster for a bout. I’m just lucky the league in my town was so new that they let anyone jump in straight away!

Practices cover off-skates training (which involves an inordinate amount of sit ups, push ups, squats and running), endurance skating, agility, and lots of hitting and blocking. I also try to do some more strength training every week, plus yoga to balance all the tough training we do.

How often do you practice with your team? And how often do you compete?
We practice three times a week, and we also fly in guest coaches from great teams or travel to special boot camps a few times a year. The frequency of bouts really differs between leagues, but we generally play one home bout and one away bout every month of our season (which normally lasts about 8 months).

Tell us what your derby name is! And what do you wear?
I’m Blockodile Dundee, because being an Aussie is so dear to me. We have just ordered these beautiful new uniforms that remind me a bit of Rosie the Riveter – black button-up blouses with hot pink piping and silver lettering. I’m also getting derby shorts screen-printed with my logo – a crocodile eating a jammer helmet – on the butt.

Have you (or anyone on your team) been seriously injured? Does playing roller derby affect your insurance plan?
We’ve had two broken ankles since I’ve joined the team, which I can’t imagine would be that different to any other full-contact sport. The worst I’ve had is a really impressive bruise on my hip – it was about 4 inches long and 2 inches wide – from falling the wrong way. D’oh!

What are the benefits of being a roller girl? Any draw backs?
I take better care of myself these days than I ever have before. I was never consistently active and was always trying to “diet” to stay in decent shape. My main concern with food these days is that I’m fueling my body as well as I can to perform my best on the track. I’m definitely in the best shape I’ve ever been in before. I lost 20lbs in my first year of skating, which isn’t my objective at all, but let’s be honest, it’s a pretty nice perk!

The only drawback is that derby really tends to permeate into every other facet of your life, but that’s really only a drawback if you don’t love the sport (in which case, why are you playing it?!)

What advice would you give to others who are interested in being a roller girl?
Most leagues will tell you to come out and watch a practice before you lace up your skates, and you really have nothing to lose in doing that. If you don’t like the look of it, just don’t go back. But chances are you’ll be itching to get on the track, so just go for it! You are never too overweight, or too unfit, or too old – some of our best skaters are almost 40, and I met one amazing skater who is 52! And don’t you dare underestimate yourself. The girls you see on the track kick ass because they work hard, and there is absolutely no reason that you can’t do it too!

Are any of you roller girls? Any questions for Nikkee?