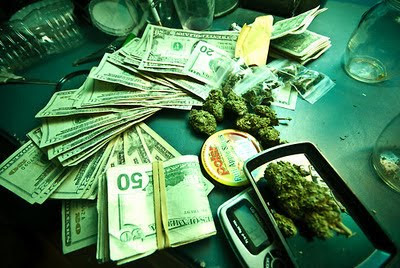 This is part of our True Stories interview series, in which we talk to people who have experienced interesting/amazing/challenging things. This is the story of Indeana*, her parents and their marijuana business.How would you describe your childhood?
The first word that comes to mind is “dysfunctional.” My mom and dad’s parenting philosophy includes theories like:
“Your brothers [13 and 14 years old] are going to drink anyway, so I might as well buy the booze for them and then at least they aren’t doing it in the woods.”
[Upon finding out that my boyfriend and I were waiting until we got married to have sex, I was 15] “Marriage is just a piece of paper! Why don’t you just go out in the woods and burn some leaves. Have your own ceremony!” (What Mom tries to convince her daughter NOT to be abstinent!?)
“Mom! I missed the bus can you drive me to school?? [3 miles away]” “I’m tired, just skip today.”

I was absent at least one day every week of high school and usually twice a week in middle school and elementary. To this day, I don’t know how to do math problems like 1000 minus 674 because I missed the day of school where they taught us how to “borrow” from numbers with several zeros.

What were your parents’ “day jobs”?
Dad is a self-employed mechanic (and he’s incredibly mechanically intelligent, but he has NO ambition) and Mom bartended, worked in retail, or at a greenhouse. Mostly though we lived off welfare and other government assistance programs. I was in the free lunch program, our heating oil was paid for in the winter, groceries were bought with food stamps, there was even one Christmas where a local charity donated presents to my family. The harvest is in the fall so by Christmas we always had plenty of money. But since it was drug money, no one knew, so we got donations and hand-outs anyway.

How old were you when you realized what was going on?
I always knew that Mom and Dad [and my brothers, aunts, uncles, family friends, visitors…] did drugs, but it wasn’t until about fourth grade that I realized they were growing and selling. I remember stewing in my room thinking “How can I tell Mom that I know? How do I say it?” Finally in fifth grade I was sitting at the table with her after dinner and I just said, “Mom, I know what you and Dad are doing.” Her face was hilarious!

Did they ever talk to you about what they were doing? Or why?
There was never any talk of why. I know it’s because my parents’ lives turned out very differently than they had hoped. Mom got pregnant when she was 17 and rushed into marrying my dad, who has always been abusive. They both lost all vibrancy and just sort of exist now. They have no ambition, no drive.

Growing pot is seasonal (winters off, woo!), relatively easy and very profitable. It’s a career that feeds all their worse qualities, including their addictions. We sometimes talked about what they were doing. What type of soil is best, problems they were having, where their “crops” were, stuff like that. Once Mom saw me cutting pictures out of magazines for a collage. Apparently I was pretty dexterous with the scissors because she offered to pay me to help them trim the plants when they brought in the harvest. (I never did.)

Did they smoke it around you? What did they tell you about using drugs?
Yup, they smoked around me. Constantly. When I got to be 14 or so they even tried passing to me but I just wasn’t into it. I was always the black sheep in my family because I never did drugs, never got in trouble at school, never drank, etc. For my oldest brother’s graduation party, Mom threw him an all-night kegger party with about 150 friends and family. I had a booze-free barbecue with 10 friends. The subject of why they did drugs or what they thought about it never came up. I almost think they didn’t think that deeply about it. They smoked because they had always smoked.

Do you have any idea how much money they made selling pot?
Not a clue. I know it was a lot though because several times a week during the harvest they would bring in six or eight huge garbage bags full of pot plants. They had dozens of crops all over the county, each with at least that much. There were seasons though when the weather wasn’t in their favor or pests were abnormally problematic and they would complain about the harvest being smaller.

Did you ever meet any of the people they sold it to?
Yup. The main guy was my Mom’s “cousin” who I really don’t think was her cousin because no one ever told me whose son he was! He was the “wholesale” buyer who most of the stuff went to. The rest went in small portions here and there to friends and family members.

Did you ever feel like anyone in the family was in danger because of the pot?
YES! When I was a kid I hated letting the dogs in and out at night. Every time I opened the front door and looked out into the woods that faced our house I’d imagine a DEA agent with a sniper rifle aimed at our house. Laying in bed at night my mind would wander towards scenarios of us being raided and me having to take my little brother and hide him in a cupboard so he didn’t get taken away. That constant fear is the biggest reason why I never have and never will do drugs.

How did they do all of this without getting caught? Did they ever get caught? Do they still do it now?
I’m amazed they never got caught. I think the only reason they didn’t is because they worked with family instead of strangers and we lived in a very rural area. If a man fully clad in camo jumps out of a van carrying a backpack and hikes miles into the woods, people in the sticks just think he’s hunting.

But even working with family has risks. Two of my uncles (let’s call them Uncle A and Uncle B) helped out for years and then there was a big feud and Uncle A bailed. Mom and Dad were sure he was gonna turn them in or sabotage their crops so they had to find new locations and destroy everything he knew about. Uncle B stuck around for a few more years after that but then there was another feud and he left too, so the whole process started again. This time there was all kinds of backstabbing and name calling. The Uncles even kidnapped one of our dogs and ditched him miles away from home in the woods. It’s a miracle we found him, he was emaciated and confused. It was awful.

I’m pretty sure Mom and Dad are done with it now. My brothers are older and married and Uncles A and B are gone. They just don’t have enough help anymore. Mom is currently on Disability and they still get all kinds of government assistance. Since it’s just the two of them and my little brother at home it’s apparently enough for them to survive without the pot money.

Do you think any of this affected your feelings towards drugs?
Absolutely! Like I said above, that constant sense of fear makes drugs supremely unappealing to me. Watching my parents use substance abuse as a means to not confront their issues, watching my mom’s mental health deteriorate, watching my dad waste his incredible intelligence, watching my older brother nearly get a divorce because his wife can’t stand him doing pot but he can’t/won’t quit, worrying constantly that my little brother will go down the same path… That’s plenty of motivation for me to stay clean.

Do any of you know people who grow their own pot? Any questions for Indeana?

* not her real name