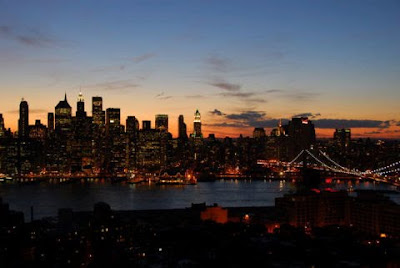 This is one of many interviews that make up the True Story series, in which we talk to people about interesting/amazing/challenging things that they’ve been through. This is Nicole’s story. She was in fifth grade when the planes hit the World Trade Center towers.
How long have you lived in New York?
I’ve lived in New York for about 12 years now. I was 7 when I first moved to Brooklyn, and then I moved to Staten Island when I was 14.What were you doing when the planes hit?
At the time, I was in 5th grade. So I remember getting to school, hanging up my jacket and sitting down at my desk, and as soon as I reached my desk the Principal called my brother and I down to the main lobby because we were going home. Not knowing what was going on, I was like, “Yes! no school today!” My father picked us up that morning in full his Army BDU’s (which is Battle Dress Uniform, or the camouflage uniform.) He tries not to do this often because it tends to freak people out a little, so when he showed up dressed like that, my brother and I knew something was up.

He drove us home very quickly, and he was silent the entire ride. My family lived on an Army base in Brooklyn at the time, and we needed to get back onto the base quickly because they were going into a full lockdown. No one leaves, no one gets in.

Can you tell us about what happened in the hours that followed the attack?

I remember getting home and looking at the news right when the first tower fell, and I couldn’t even comprehend what was going on. At the age of 10…I was so confused. My father was very, very stressed about the whole thing, and my mother was crying. I eventually found out that a few of her friends had worked in the first tower that fell. Everything was just chaotic at that point. There’s really no other way to describe it.I was confused because no one would explain to me what exactly was going on, and all I had was images on the news of buildings falling, and fires…it was a mess. A huge, ominous cloud of black smoke drifted closer and closer to Brooklyn from ground zero as the minutes passed, which really added to the general mood of sadness.

What was you life like in the weeks after the attack?
Life was, again, just a mess. People were paranoid, became very racist, and also, they were all very distraught over the whole thing. I didn’t have school for 3 days after the attacks, which was a good thing. Many people I knew lost a lot of friends and family members, and it was incredibly devastating.

What really effected me personally though, was the racism. Many of my friends were Lebanese, and they were constantly hassled and called terrorists. One of my friends was even spit on while we were walking home. It was really just brutal.

Did you ever feel like you wanted to move to a “safer,” less targeted city after 9/11?
Personally, I always felt a little safe, despite everything that was going on around me, because of where I lived. The Army base was incredibly safe and definitely gave you that nice sense of comfort that people desperately needed at that time. There’s nothing like a bunch of Military Policemen walking around with machine guns to make you feel secure, I’ll tell you that much.

Have you suffered any long-term effects from 9/11?
As far as long-term effects, I have been lucky enough not to have suffered anything serious. The only thing I suffer from is slight anxiety while flying that I didn’t have previous to 9/11. I fly quite frequently, so that’s actually kind of a pain…but it’s certainly better than being afraid of traveling by subway or being afraid of Manhattan in general.

Were any of you in New York on 9/11? Any questions for Nicole?