True Story: I Have 12 Siblings 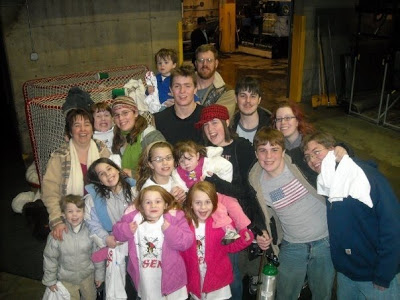 This is part of our True Story interview series, in which interesting/amazing people tell us their stories. This is the story of Ashley and her family. And, yes, that’s really them in the above picture.

How many children are there in your family? There are thirteen of us: four boys and nine girls. The age range is twenty to two years old. There is about a year and a half to two and a half years between each child, with one set of twins.Where do you fall in the order of things?

I am the oldest of all the kids, the one that got to be the guinea pig. I tested the boundaries while the rest of them watched me, saw what the consequences were, and then did it themselves!Could you tell us about your parents’ decision to have a family of this size?
Like most newlyweds, my dad originally swore that he was never, ever having kids. But of course they did, and after my sister Abby they decided that they weren’t having anymore children. But my mum really likes babies, so they had an “accident” baby, Allison, and after that they just kept having kids, I guess.

My sister Talia has colpocephaly, genetic disorder, as well as a seizure disorder, GERD, a tumor in her brain (made of fat so it’s benign), requires oxygen, and a ton of other things. Because of all these issues, she is eternally a toddler, stuck the size of an 8-9 month year old and about the same developmentally, although she is crawling now! She is so, so sweet and happy.

Tell us how you fit everybody under one roof!
My dad really likes to build things! We have lived in the same house since I was six; a three bedroom, two and a half bath ranch on almost three acres of land. As the family grew, so did the house. He built a beautiful foyer, a front room, a wrap-around porch, put in a staircase, a front room, an office and eventually a library. It’s ginormous – four bathrooms (two are usable) and twelve bedrooms.

How do people respond when you tell people you have twelve siblings?
“What??! Are you guys like mad religious or something?” Or they say something crude about rabbits. Most people take it in stride, I don’t usually tell people when I first meet them. To me, my siblings aren’t a number; they are people, names and personalities, it isn’t really a big deal to me!

Do you think having this many siblings impacted your relationship with your parents and your brothers and sisters?
I think that I have a good relationship with most of my family. I think that if I had fewer siblings, life wouldn’t be as much fun as it is. I call my Mum at least once every two days. I get along alright with most of my siblings though my sister Alissa is too cool to hang out with me right now and my brother David and I have never gotten along. I’m so much older than most of my siblings, I know that I will never be as close to them as I am with my two sisters Alissa (17) and Abby (14).

I can’t imagine life without my brothers and sisters. There wouldn’t be Talia or Torrey; I would miss Noelle’s awesome fashion sense, and Autumn’s sarcastic personality. I wouldn’t be as food conscious from having Caden around who is allergic to corn, wheat, soy, citrus, and oats, or anything with histamines in it. I wouldn’t have the twins, Maddie and Grace to be my little copycats. I am glad my parents had them all; I would probably have ended up as one of those selfish, “daddy pays for everything” rich bitches, instead of a thrifty, d.i.y., creative lady that I am.

What are the benefits and draw backs to being part of large family?
I was homeschooled until college, so I could never get away from my Mum, never. I was with my family all of the time, and I enjoy being alone, so for me it was hard being around people all of the time.

Being a part of a family, large or small, is hard; it takes a lot of work to not go crazy. I have a good family: a solid relationship between my Mum and Dad. They really do care about us, enough to make our lives miserable when they think we aren’t up to snuff. We never went hungry and I always had someone to be with if I got lonely or bored. What more could you want?

How many children do you want to have?
I don’t know yet, I want to wait until I am out of school to start having kids. I figure I will start having kids when I’m about 26 so that gives me a few years. But I cannot wait to be pregnant, to be a lifegiver, to have a body swollen with baby goodness. I know that I don’t want as large as a family as my parents have, but I also believe that every person conceived has a life force, a personality, so that makes it hard to pick low numbers when thinking metaphorically about children. I’ll just have to wait and see how much it hurts to give birth before I decide how many times I want to go through with that!

Are any of you from large families? Any questions for Ashley?