How To Stop Psyching Yourself Out (because that ish is exhausting) 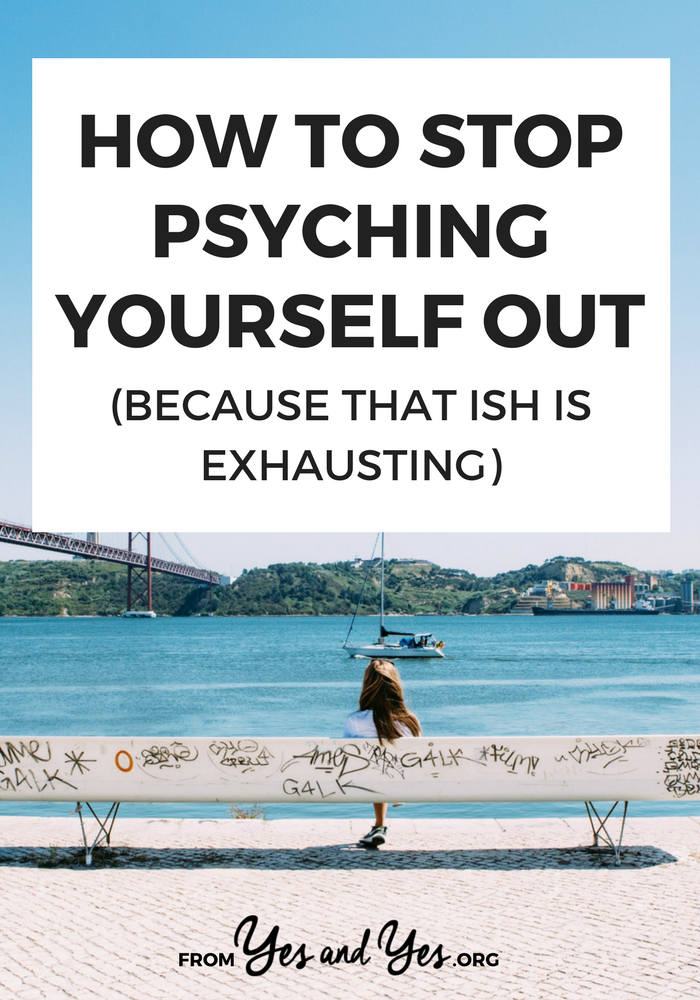 Dear Sarah,
I’m a senior in college and an English major. Over the next two weeks I have over 85 pages worth of papers to write. How do I work hard and stay optimistic without totally psyching myself out?
Oh, friend. I have been there so hard. There was a three-month period in 2007 in which I attended graduate school full time, held two part time jobs, attempted to go vegan and lived with three other people in a two bedroom cottage.
What? Yes. How ridiculous am I? And when it came time to write my papers, my coping technique involved staring the computer into submission, crying and then eating several candy bars.

However! That awful three-month foray into insanity taught me a bit about how to chill out in the face of pressure and not completely psych myself out.

How to stop psyching yourself out

Try your hardest. No, really. Your actual hardest.

I don’t know about you, but often times I confuse “not being totally lazy” with “trying hard.” If I look back on high school, I realize that what I thought was “trying hard” was actually about 50% of what I was capable of. College required about 70% of my best effort and graduate school called for about 90% (with the occasional bit of 95% in that damn grammar class!)

And I think we all know what trying our hardest feels like, in anything that we’re attempting:

* doing all of the readings (before class!), attending the study session and meeting with your prof if you have questions

* networking with people in the field you want to get into, learning the applicable software, attending workshops and volunteering for big, hard projects that nobody wants to do

* asking your friends if they know anybody they can set you up with, giving internet dating a try, talking to cute strangers and going out with the perfectly nice guy you’re not sure about.

When you know you've tried your actual hardest, whether you succeed (almost) becomes secondary. Click To Tweet

You can’t do anything else, you’ve given it all you’ve got. There’s nothing to get psyched out about. Also – when you’ve realllly tried your hardest? You’re pretty likely to succeed, right?

If you’re losing your mind over your millions of term papers, your fruitless job hunt, your never-ending singledom or your frequently rejected manuscript, it’s easy to feel like you’re the only one going through this.

But, shockingly enough, you’re not. Other people in the world are stressed out, unemployed, unhappily single or unpublished. While I wouldn’t necessarily recommend hunkering down for a three hour bitch-fest with your equally frustrated peers, it feels good to know you’re not alone.

Allot yourself a bit of time to whine about this predicament and then see if these friends are trying anything you haven’t thought of. Maybe they’re friends with a physics whiz or a publishing agent or a single cutie. Maybe they’ve got some academic references you can use. Combine and use your powers for good!

If you’ve been going all out, trying your absolute hardest for the last two weeks, you’re probably in need of a breather. Energy and creativity need to be replenished, and really? The library has to close at some point. So take some time (two hours, a day, a week) and completely distance yourself from the project.

Shower, change clothes, grab lunch somewhere new with someone who’s not studying the same thing as you. Take a weekend away and read things that have absolutely nothing to do with what you’re working on. Watch a fun, mindless movie. Go dancing and drink a little bit too much. Get a massage. Go rollerskating.

Realize that the world will not end

During graduate school I was whining to my fantastic friend Jess, lamenting the possibility of getting a C (shock and horror!) on a paper. She leveled her eyes at me and said “And you know what will happen if you get a C? The world will keep doing this (insert rotating hand motion here)”

And girlfriend was right. I know that these papers, this job search, this grad school application seem like the end-all-be-all right now. But they’re not. Really. They’re not. I didn’t get my driver’s license till I was nearly 17. I went through a terrible break up at age 29. I didn’t get into the first graduate school I applied to. And you know what? Not dead.

Remember your other strengths

In the event that you really try your hardest on these papers (or apartment hunt. or your gallery submission) and things don’t work out, remember that you are not defined by this one small thing.

You are not just a student or a writer or an ex-girlfriend. You are a great friend, a sibling, a maker of great sandwiches and the owner of some gorgeous legs.

And the grade on your term papers isn’t going to change those things.

How do you deal with deadlines and pressure?

P.S. You don’t have to be failure-proof. That’s not a thing.